Sisyphus would have felt for the Australian Energy Market Commission (AEMC) and Climate Change Authority (CCA). In Greek mythology, Sisyphus’ punishment for being too clever was to be cursed to repeatedly roll an enormous boulder up a mountain, only to watch it fall back on him, then to begin again.

The Sisyphean curse for the AEMC and CCA has been providing repeated advice on the integration of carbon and energy policy, only months after delivering significant reports on the same subject. The bodies were asked in April this year to provide a report on ‘Power System Security, Electricity Prices and Emission Reductions’. This is well-trodden ground, with the AEMC providing its most recent 78 page assessment of these issues less than six months ago in December 2016. The CCA addressed carbon policy options in reviews of the Renewable Energy Target in 2012, 2014 and in three reports of the Special Review of Climate Policies and Goals commissioned by the Commonwealth Government.

AEMC CEO Anne Pearson told a parliamentary inquiry last week that their latest report would be provided to the Minister by 1 June 2017, and publicly released a fortnight later.

Here’s One We Prepared Earlier

Like the Finkel Blueprint for National Electricity Market Security to be provided to the Council of Australian Governments (COAG) on 9 June 2017, there seems little doubt that the AEMC and CCA will recommend urgent action to address carbon policy uncertainty and an ‘Emission Intensity Scheme’ allowing trading within the electricity generation sector.

“And the reason we came to the conclusion that an emissions intensity scheme was the best way forward and the best, the most appropriate mechanism was because it was the one that worked the best against high gas prices, low gas prices, high demand, low demand or a range of those variables”[i]

The AEMC review, Integration of Energy and Emissions Reduction Policy assessed a range of carbon abatement mechanisms, finding that an Emissions Intensity Target (EIT) had the lowest impact on wholesale prices, the lowest resource costs and the lowest cost of abatement to meet a given emissions reduction target.

Prices under an EIT are generally in line with prices under BAU. These results are intuitive because the EIT is technologically-neutral and hence encourages the least-cost form of abatement to be adopted by market participants. Further, the EIT maintains the standard NEM allocation of risk between generators and consumers regarding future changes in conditions: generators continue to make investment and retirement decisions based on price signals in the spot and contract markets, and face the outcomes of their decisions. 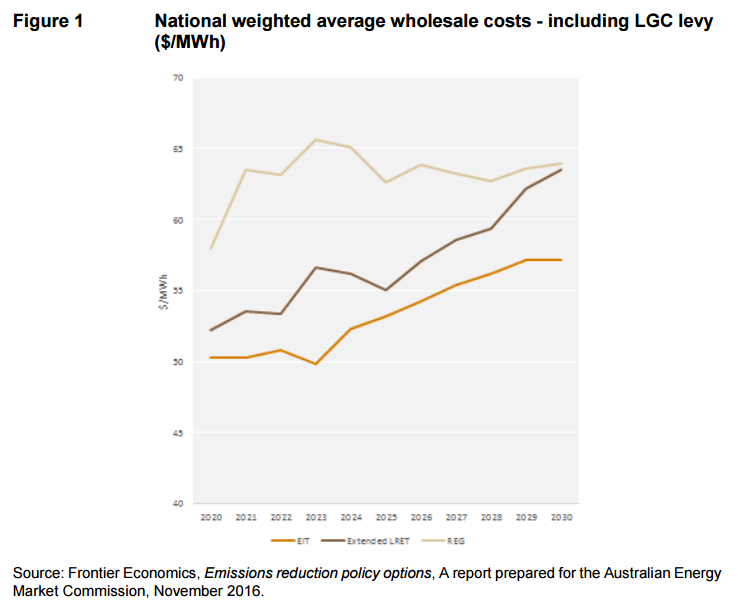 The AEMC findings were consistent with those of the CCA in relation to the electricity sector, which recommended that a market mechanism, in the form of an Emissions Intensity Scheme, should be part of “Australia’s policy toolkit”.

The AEMC also noted that AEMO analysis revealed that, of the three emissions reduction mechanisms, the security-related implications were lowest under EIT and highest under and extension of a Renewable Energy Target.[ii]

Simultaneous to the AEMC, CCA and Finkel advice specific to the energy sector, the Commonwealth Government is also undertaking its 2017 Climate Policy Review, in careful consultation with stakeholders. Approximately 400 submissions were lodged in early May addressing form questions about abatement in energy, transport, resources, manufacturing, agriculture and the built environment.

However, many recognise the Federal Government has ruled out an Emissions Intensity Scheme and a pragmatic examination of alternative frameworks may be required. The Grattan Institute submission floats two other options:

The Climate Policy Review has also seen an emerging consensus not only that there should be a long-term carbon abatement target beyond 2030 – but that it should be ambitious in line with the COP21 aspiration. The Clean Energy Council and Climate Institute have long advocated for a zero net emissions objective for the electricity sector. During the Electricity Network Transformation Roadmap consultations in 2016, Energy Networks Australia and the CSIRO identified it was not only desirable to achieve a zero net emissions electricity sector by 2050 but feasible without compromising affordability and security. This month the Australian Financial Review reported major energy companies, AGL Energy, Origin Energy and Energy Australia had backed a call by The Climate Institute for a 2050 carbon emissions target consistent with Australia’s obligations to aim at zero net emissions.

The Property Council submission also endorses a zero net emissions target for 2050, along with other stakeholders.

While the Federal Government’s 2017 Climate Policy Review appears to have limited degrees of political flexibility, ‘treading water’ will not be an option for three key reasons:

1. The ERF revenue is running out

A total of $2.2 billion has now been expended from the Emissions Reduction Fund (ERF), representing 86% of its resources, and it was not supplemented in the Commonwealth Budget last month. While the Fund has achieved 189 million tonnes of abatement at a cost of under $12 per tonne, it is recognised current policy settings, including the ERF safeguard mechanism will require review to achieve 2030 targets of 28% below 2005 levels by 2030.

Federal Budget funding of the 2030 targets will be impractical. The Australian Greens recently commissioned a Parliamentary Budget Office costing, which purported to show that the on-budget cost of funding the 2030 target through an extension of the ERF would be $23.6 billion.

2. Time for the RET is almost up

The large scale Renewable Energy Target (RET) reaches its ceiling of 33,000 GWh in 2020 with significant market uncertainty about what national mechanisms will be available, or are required, for cleaner energy generation beyond that date.

3.International Markets are moving on

The Carbon Market Institute submission notes that the closure of the Kyoto Protocol in 2020 means uncertainty for the future of the underlying Clean Development Mechanism (CDM) and associated offset credits (CERs), and Australia will also increasingly compete with demand for international abatement from other countries to meet their commitments.

The supply of units will be further impacted by the Chinese ETS – which is set to come online in 2017 and cover approximately 5 billion tonnes of CO2. Once operating, the Chinese system will be the world’s largest market. Considering all of the above there is no certainty that there will be an available supply of low cost international units available in the post 2020 period. [iv]

What in the World…

Australia’s Climate Policy Review can look to international trends in carbon policy measures, notwithstanding the imminent risk that President Trump could withdraw the USA from the COP21 Paris agreement.

A recent International Energy Agency Report, Energy, Climate Change and the Environment, provides strong support for the role of emissions trading schemes and carbon pricing as part of a ‘toolbox’ approach to achieving COP21 commitments. As Figure 3.1 from the Report highlights, Australia is something of an outlier with its current approach to emissions trading. 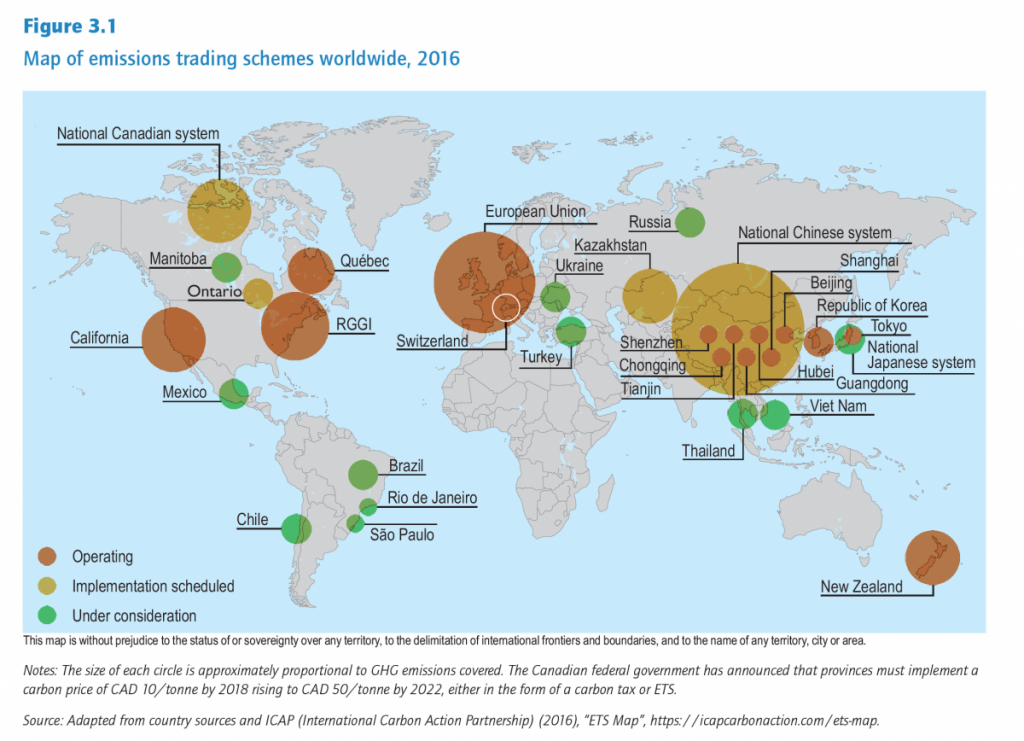 The Carbon Market Institute recently noted in Renew Economy that over 90 countries have identified the possible use of carbon markets in achieving their Paris Agreement commitments and the core features of the ERF Safeguard Mechanism are well suited to emissions trading:

“Let’s be clear.The Safeguard Mechanism in its existing regulatory form, is actually a type of emissions trading scheme. If covered facilities exceed their baselines they are required to purchase emissions, in the form of Australian Carbon Credit Units (ACCUs) from the domestic offset market. This involves trading emissions. Under the Emissions Reduction Fund (ERF), ACCUs are currently being traded by project proponents to meet Government contracts for delivery of abatement. Emissions trading is happening now.”

How will COAG enable a more connected future?

No Ashes battle here: the Poms agree with us on fairer power pricing