Since 2012, there has been a step-change in the focus given to customer engagement on energy services, including in the regulatory processes used to set energy network revenues.

Network service providers are increasingly embracing diverse forms of consumer engagement and stakeholder transparency. As summarised in the figure below, this is evident in the use of consultation forums and customer councils, structured and informal engagement in infrastructure decisions and pricing frameworks, social media engagement, web portals and cost/service trade off research.

Clearly, there is still a long way to go to build shared capability and confidence. The recent Electricity Network Transformation Roadmap highlighted key actions to share engagement practice and industry wide evaluation. The Customer Engagement Handbook highlighted a range of customer engagement techniques to enable businesses to make choices that genuinely reflect the needs of their customers.

During the Roadmap process, networks agreed on a shared commitment to embed consumer engagement as a core feature of their business model, rather than a regulatory compliance process. While assessments of the effectiveness of consumer engagement for regulatory proposals has been controversial at times since 2012, some recent processes have seen strong consensus. They may provide signposts for the ability of good engagement to align customers and businesses – in a way that is being recognised by the Australian Energy Regulator (AER). 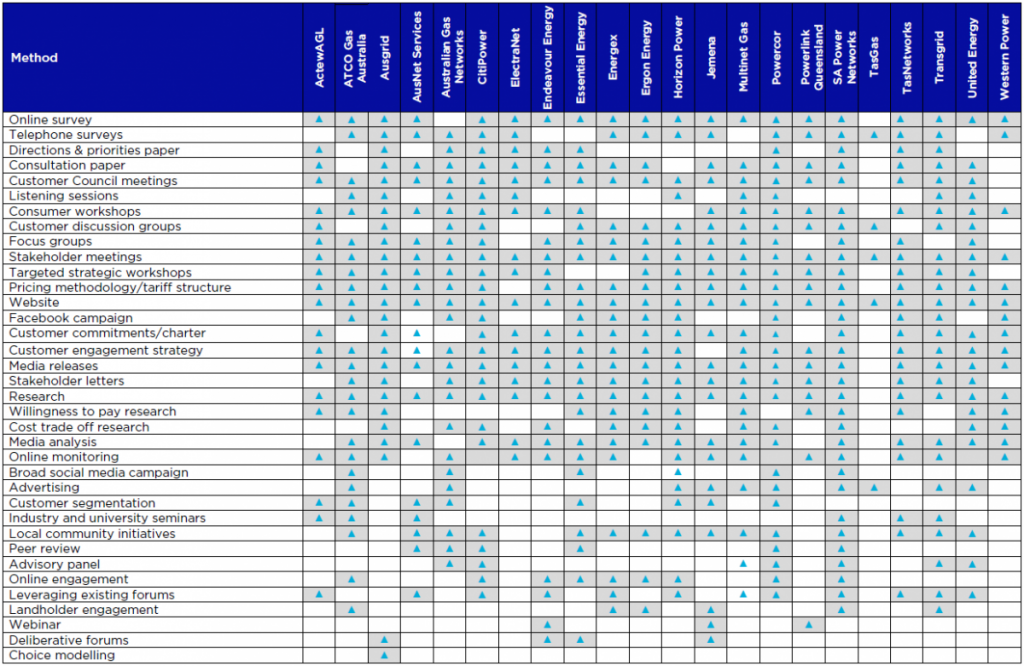 A recent example of the positive outcomes of intensive business-wide commitment to stakeholder engagement comes from Australian Gas Networks (AGN). This month the AER’s Draft Decision largely accepted the AGN proposal and noted, that despite an increase in revenue, “submissions were overwhelmingly in support of AGN’s proposal”.

The striking feature of the AGN approach to customer engagement was to release its ‘draft plan’ in June 2016 –six months before the submission of the regulatory proposal – to seek views on what it intended to submit to the AER. The AER noted that:

It is clear from submissions that these efforts were both valued and productive. AGN was rightly commended for:

The AER cited submissions stating the consultation had built confidence that AGN’s proposal was “much more genuine than ambit” and it noted that the AER Consumer Challenge Panel (CCP11) confirmed that AGN has clearly met its objective of presenting an access arrangement proposal which is underpinned by effective stakeholder engagement[ii].

AGN’s overarching objective was to submit a proposal that delivers for its consumers, is underpinned by effective engagement, and is capable of being readily accepted.[iii] 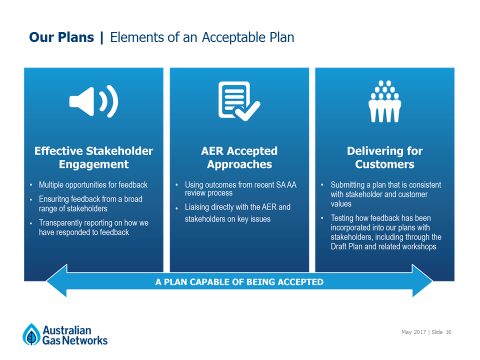 This process drove improved regulatory outcomes in a number of important ways. The AER was in a position to draw on explicit evidence from both customer groups individually and the Consumer Challenge Panel on how the proposal was consistent with the long-term interests of customers. The regulator was in a position to approve the businesses capital and operating expenditure forecasts and the method for calculating finance costs.

Beyond helping ensure a robust customer-focused proposal, engagement provided a number of other specific benefits

This incidentally highlights one of the relative strengths of the National Gas Rules which provides a relatively flexible and non-prescriptive framework in which new approaches can be trialled, without the need for formal or lengthy rule change processes.

With a large regional and remote customer base, Essential Energy has had a clear focus on engaging with the communities it serves. As part of developing its 2019–24 regulatory proposal, Essential Energy has embraced an ‘Outside-In, Always-On’ approach to customer engagement and service delivery. This means that, rather than delivering pre-determined outcomes to customers and expecting them to be approved (Inside-Out), Essential Energy has sought more deliberative outcomes. This has required an Outside-In engagement approach which seeks to continuously (Always On)  inform, consult, involve, collaborate and empower its customers throughout the decision and delivery processes.

The first step centred on a series of ‘town hall’ style, face-to-face stakeholder forums across NSW to ensure that the breadth and the depth of customer viewpoints could be captured. This saw more than 500 participants engaged through workshops in Broken Hill, Cootamundra, Dubbo, Goulburn, Port Macquarie, Tamworth, and Wagga. Insights gained were supported by in-depth interviews with large customers and advocacy groups and a further 1,000+ online surveys completed by over 750 residential customers and 250 small to medium businesses. 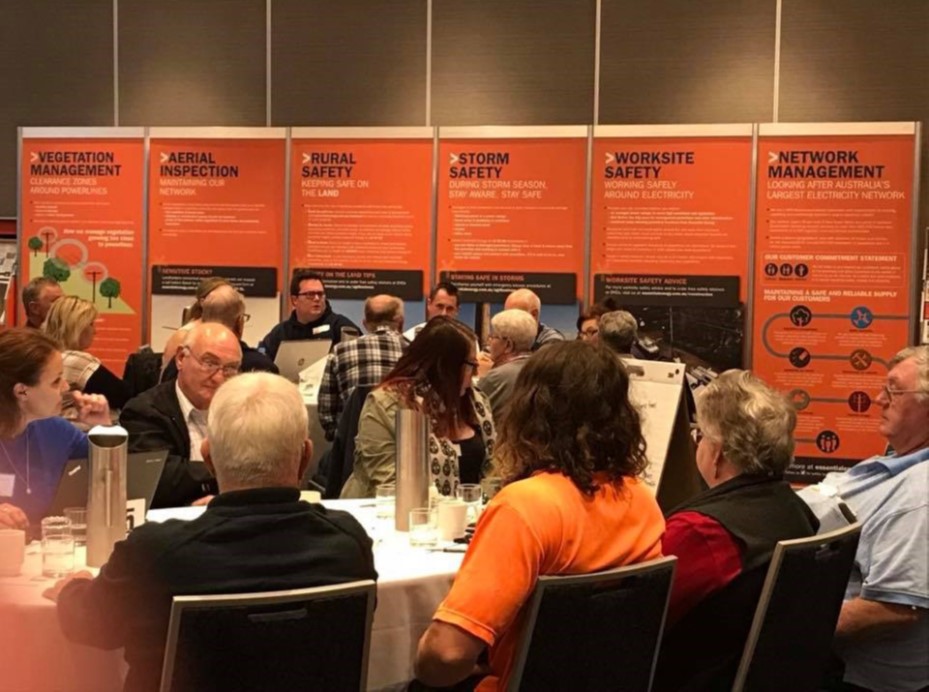 The format of the forums was highly participative, allowing customers to receive balanced information in bite-sized portions. This information then fuelled active discussions about how electricity distribution services impact them and what they value most. The deliberative nature of the events also sparked healthy discussion among participants about affordability and highlighted an emphasis on delivering the lowest possible prices without jeopardising power reliability. Overall, the response to the forums was very positive and the business gained a much clearer appreciation of how its customers view the industry as a whole, the role the business plays in electricity delivery, and the service levels it provides.

Phase Two of the engagement program will see the deliberative forums repeated across NSW during August and September to hear customers’ views and ensure that the feedback is accurately interpreted into a draft regulatory proposal that best reflect their views.

While ‘one swallow does not a summer make’, there is increasing effort and collaboration across customer advocates, energy networks, engagement specialists and the Australian Energy Regulator which is informing new approaches.

There is widespread recognition that genuine consumer and stakeholder engagement goes beyond simply providing an opportunity to stakeholders to express their views. Customers must have clarity about what decisions they can influence, trust that their views are heard and understood, and be able to see how those views have been taken into consideration.

A more constructive dialogue is more important than ever in today’s dynamic energy market environment. Networks need to understand shifting customer value drivers and transform their businesses to deliver clear value to customers.

Networks businesses are committed to pursue continuous improvement for meaningful and successful engagement between network service provers, consumers, industry stakeholders and the regulator.