South Australia now generates more than half its electricity from renewable sources[1]. Less reliance on synchronous generators, such as coal or gas-fired generation, means less stability in the power system.

In October 2017, the Australian Energy Market Operator (AEMO) declared a shortfall in system strength in South Australia and specified that system strength services were required on an ongoing basis to keep the grid stable. In November 2018, AEMO also issued the same direction to a generator in Victoria and the following month, declared an inertia shortfall in SA. The latter led to the planned deployment of high-inertia synchronous condensers by ElectraNet.

The Australian Energy Regulator has approved a $166 million investment by ElectraNet for the four synchronous condensers, which will act as shock absorbers to fluctuations in energy supply. Installing these synchronous condensers on the transmission network has been identified as the most efficient and least-cost solution in the short to medium-term to stabilise the grid.

A secure power system needs adequate levels of system strength and inertia. When there is not enough of these services, there is an increased risk of system instability and supply interruptions.

AEMO declared minimum requirements which ElectraNet must address to support the electricity system. New renewable generators also must ensure the impact of their connection does no harm to the power system.

ElectraNet’s synchronous condensors will strengthen the SA power system and ensure there is adequate system strength and inertia.

While the $166 million project cost will be recovered from customers over a 40-year period, it will be offset by avoided costs of AEMO market directions estimated at about 34m$pa[3]. The new synchronous condensers will result in an estimated net saving of $3 to $5 a year on a typical residential customer bill.

During the planning phase for new connections, grid studies are undertaken to ensure new renewable connections do no harm to the grid. These requirements can be achieved by the generators installing synchronous condensers or in renewable energy zones sharing the costs of a more cost-effective larger synchronous condenser across a number of generators. The Australian Energy Market Commission rule change on the transparency of new generator connections will be helpful to allow generators to consider more cost-effective connection to the grid.

Where are they being installed?

The first two synchronous condensers will be installed at Davenport by mid-2020 and the second two at Robertstown by early 2021. 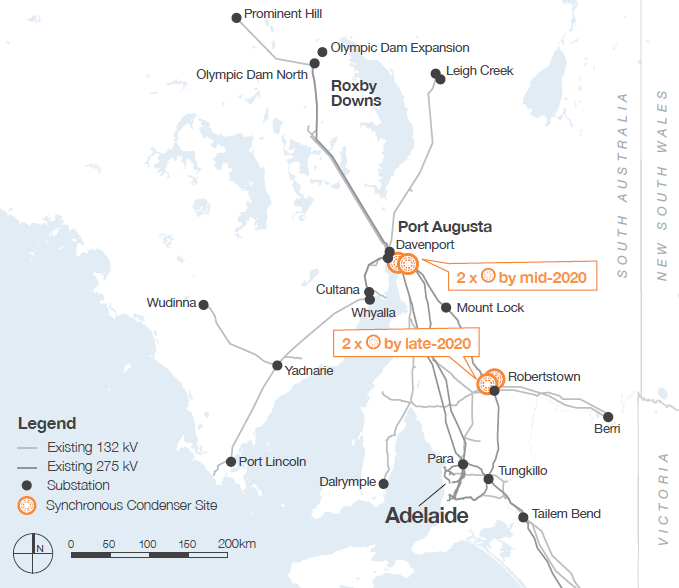 Are synchronous condensers the future for a renewable grid?

As more renewables such as solar and wind generators connect to the grid, traditional synchronous coal and gas-fired generators operate less often or may even become uneconomic.

Synchronous machines have provided system strength for free in the past, but these services are becoming less available in sufficient quantities. Hydro-electric schemes or pumped hydro can also provide system strength services depending on the technology deployed. However, in a dry state like SA, there is not the water resource or mountainous terrain required to support them – like there is for Snowy or Hydro Tasmania.

Recent Australian National University research has indicated that the growth in renewables is four to five times faster per capita in Australia than the European Union, Japan, USA or China and ten times faster than the world average[5].

As Australia transitions to increasing amounts of renewable generation, over time there will new technologies that can support the power system. But for now, expect the age of synchronous condensers to continue to enable the transition a lower emissions grid.