Father’s Day in Argentina and at 7:07am a failure on the electricity grid left about 48 million people in the dark.

So how did a significantly interconnected grid with high levels of synchronous generation collapse in such a spectacular fashion and could this have been avoided?

Comparing Argentina’s grid to Australia’s may help provide information on how we can improve our own grid security. 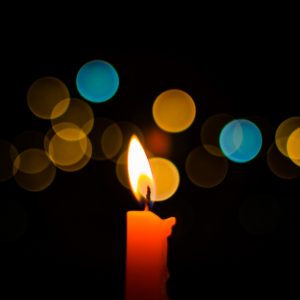 What happened to make the grid go down?

Exepnditure on Argentina’s grid had been cut for some time. Transmission faults were known to occur causing partial blackouts.

However, on 16 June 2019, the grid collapse was catastrophic. Customers were left in the dark and were requested to limit water use. The extent of the disruption can be seen by a massive drop in demand, Figure 1, which slowly recovers 12 hours later. 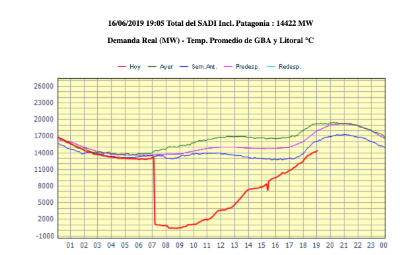 A short circuit disconnected a 500kV transmission line that runs from the city of Colonia Elía to Belgrano in Buenos Aires. It appears at the same time an automated system disconnected a 500KV line that runs from Mercedes to Colonia Elía, although it is not yet known why this second disconnection occurred.  A third 500kV transmission line had been out of service since mid-April to relocate a tower, this line connected Elía Nueva Campana. 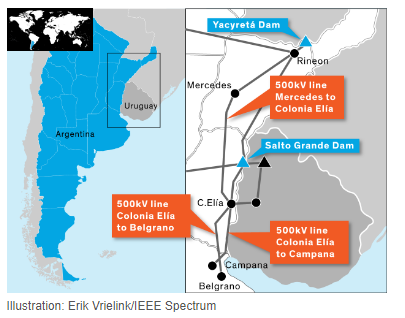 Water levels in the Yacyreta Dam and Salto Grande Dam were high. Early Sunday morning both of these hydroelectric facilities were producing electricity at near maximum capacity, although demand was low.

A further 1,000MW was being imported across the interconnector from Brazil on a high voltage direct current link.  This meant that with one line down, high levels of power were being transferred south on the remaining lines.

It is possible that transient instability occurred in the north west region and the Yacyreta hydro plant (3,700MW) tripped, possibly causing a fast frequency drop.  It appears that the Salto Grande hydro plant (1,900MW) also tripped due to instability.

The 500kV lines to the Buenos Aires load centre went down, due to the large deficit in generation. Frequency plummeted and the system collapsed.

It would be expected that the automated systems in place to shed load or generation to suit demand should have isolated the issue associated with a short circuit and prevented those problems from spreading further around the system.  It is not yet clear why this didn’t occur.

How do our grids compare? 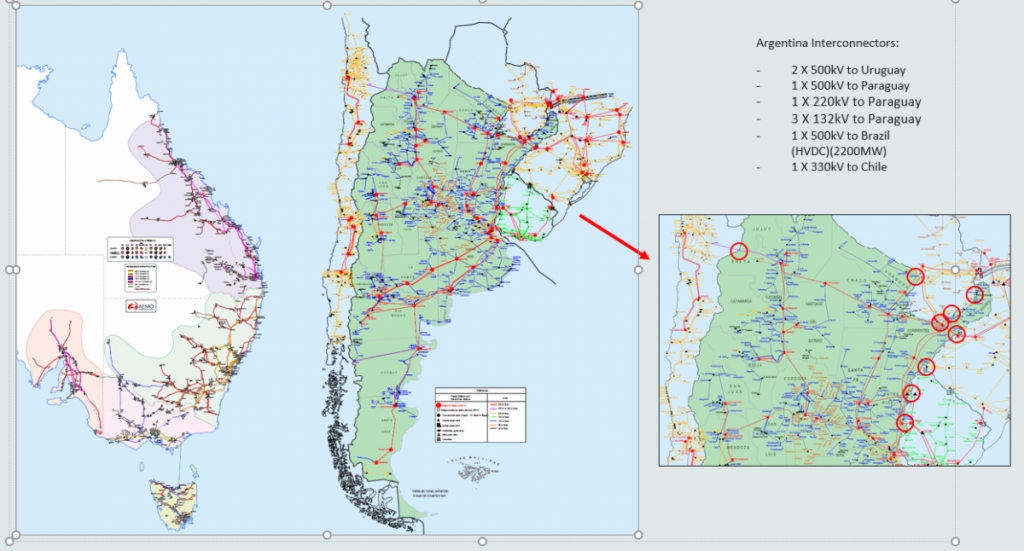 The Argentinean President Marci has promised a full investigation of the incident and an initial report is expected any day now.

The more detailed investigation may take some time to analyse what really happened and why certain control systems and frequency responses did not operate to prevent the event.

A number of media reports suggest that transmission faults did occur and caused partial blackouts, but they alone would not have caused a complete blackout such as this.

What this means for Australia

The Australian Energy Market Operator (AEMO) has investigated major incidents such as the SA System Black and analysed events in the US/Canada and Italy to learn from them how possible future events in our system may be mitigated. No doubt AEMO will be doing the same for the Argentinean failure as more detail becomes available.

It is hard to anticipate every set of grid conditions and ensure that control schemes and procedures are in place to manage them.

Control schemes established for certain electricity flows over past decades now need to be considered in light of the new grid connections and interconnectors and electricity flowing in both directions.  Grids are a lot more dynamic than they used to be.

We can’t underestimate the importance of the appropriate engineering controls to maintain the power system.

Australia also has a higher percentage of renewables in its energy mix.

Both countries rely on interconnection. Though we may not know the final conclusions for some time, it’s likely a critical transmission failure resulted in 48 million customers in Argentina losing power.

There are likely to be salient lessons for us from the southern American experience. We should be looking closely at Argentina’s grid collapse to see what we can learn to improve our own grid stability and security. 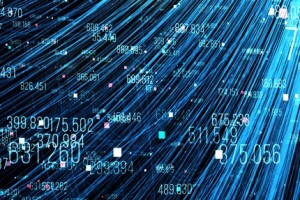