At about 5pm last Friday as Brits were winding up work for the week and about to head home, an extreme event shocked the UK’s energy system causing widespread power cuts.

Scenes from the country’s worst blackout in a more than a decade were reportedly “reminiscent of a darkly apocalyptic Hollywood film”[1]. Passengers were stranded on trains and at airports, chaos ensued on the roads and almost a million homes lost power.

While the system was restored by 5.40pm[2], the significant knock-on impact from the 40-minute event continued through the evening and has left many questions to be answered.

What do we know so far?

This was a “rare and unusual” event, according to National Grid, as two large power plants “near-simultaneously” went offline, disconnecting from the grid[3]. A 740MW gas-fired power station at Little Barford, Bedfordshire, failed at 4.58pm followed by the Hornsea offshore wind farm also disconnecting from the grid. The graph below shows the frequency starting to recover after the Little Barford trip, but then falling again when Hornsea went off.

The exact timing is unclear and it is a critical point. The UK grid is meant to be able to withstand a 1GW trip, so the 740MW Little Barford outage alone shouldn’t have decreased the frequency by as much as it appears to have. Together the two stations account for about 5 per cent of the UK’s electricity and power needs so their loss caused a major drop in the grid’s frequency[4].

Strong winds at the time led to exceptionally high volumes of renewable power which also meant fewer thermal plants were generating. Less thermal generation reduces inertia in the system which makes it less stable and able to cope with sudden frequency drops. 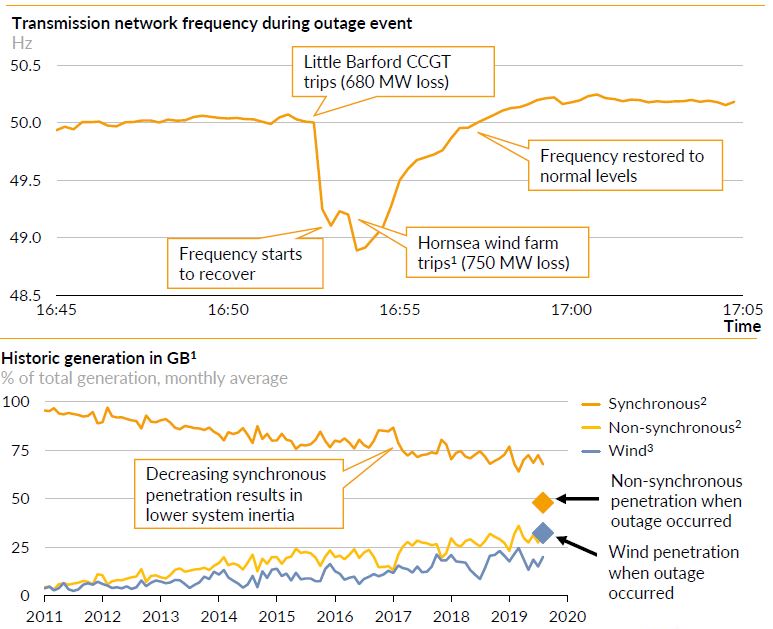 Duncan Burt, Director of Operations at National Grid, said normal protective systems reacted automatically when the two generators went offline causing the frequency fall, but the loss was so large that secondary systems were activated. These automatic secondary protection systems fire very quickly to remove electricity demand on local networks in order to keep the rest of the system stable[7] (see Figure 2 below). 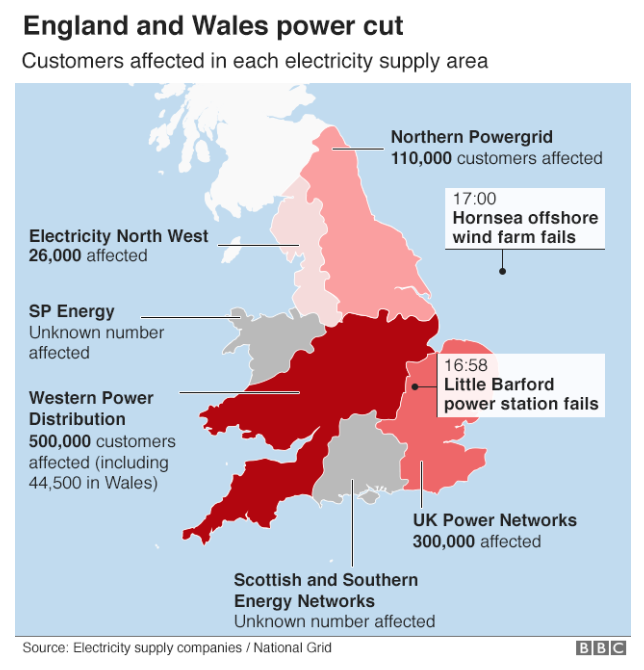 The transport sector in the UK was hardest hit by the outages with railways, roads and airports thrown into chaos. Rail passengers report being stuck on stations in darkness or on trains for hours with no light, water or toilets. The power was cut at major stations including King’s Cross and St Pancras in London and other stations like Euston were forced to close because of exceptionally high passenger numbers[8]. Boards at Waterloo showed no trains departing on any platforms[9].

Newcastle airport lost power for about 15 minutes with people using their mobile phones as torches to move around the terminal. Ipswich Hospital lost power for 30 minutes when its back-up generator failed to start. Hospital staff helped keep patients safe in complete darkness with alarms going off[10].

Ofgem has demanded an initial report from  National Grid by the end of this week to explain what went wrong. The government has also announced an investigation by the Energy Emergencies Executive Committee to look at what happened and consider whether the procedures followed by National Grid are fit for purpose[11].

National Grid has stated it will cooperate fully and has been working to understand the exact sequence of events and consequences. Some of the questions to be answered include[12]:

Questions raised by others in the energy sector include whether more integration and coordination between the transmission and distribution networks could allow for a more surgical approach[13] to load shedding. How do we better protect and prepare critical infrastructure like hospitals, airports, signalling systems and transport networks for times when these events will inevitably happen again? What role can batteries and synthetic inertia play and how might this best be integrated into the evolving grid?

Possibly most challenging – if significant changes are required, how much are they going to cost?

Food for thought for Australia

While we don’t yet know the cause of why two power plants failed at almost the same time, we do know that getting more flexibility into the system needs to be carefully considered both in the UK and here in Australia. We already have some of the highest levels of solar integration in the world and the supply of renewable energy to our grid continues to grow.

The UK event happened in the same week the Australian Energy Regulator here in Australia started legal action against four wind farms relating to their ride-through settings on the day of the SA system black event in 2016. Did the relevant settings on the Hornsea wind farm have anything to do with it tripping?

Friday’s event was a stark reminder of how critical energy can be to everyday life and how we need to carefully plan our transition to the grid of the future.