Victoria’s energy market has been described as the one of the ‘most competitive energy markets in the world’ after the introduction of retail contestability saw customers switching their suppliers at world-leading levels.

Even so, the effectiveness of that competition in delivering in the long term interests of consumers has been challenged from a number of quarters.

In addition to two separate reviews into energy retail competition, the Victorian Government has also opted to defer metering competition in Victoria until at least 1 January 2021.

In 2006, the Victorian Government mandated the rollout of smart meters to all households and small businesses across Victoria. Controversial and challenging at the time, the rollout of 2.8 million smart meters was completed in 2014. Metering charges have reduced dramatically and the technology has begun to offer Victorian energy customers a distinct ‘first mover advantage’, as the benefits of advanced metering, including safety, efficiency and supporting innovative services and technology now flow through.

Network businesses have already realised significant benefits from the smart meter implementation. United Energy notes that in one year (2014):

AusNet Services has identified and remediated more than 1,500 Loss of Neutral situations reducing the number of reported electrical shocks by 75%. For Jemena, approximately 4105 truck visits have been avoided, with an estimated benefit to all customers in 2016 of $1,654,890.

At least $100 million in available benefits were identified by Deloitte in the CitiPower Powercor area alone, including faster fault detection and outage restoration, reduced truck visits and reduced peak demand.[1]  These benefits flow to customers in the form of cost savings over the long-term.

The safety benefits being realised in Victorian networks have been independently verified by the Electricity Safety Victoria (ESV) in the 2016 Safety Performance Report on Victorian Electricity Networks. The ESV found tangible evidence that a range of hazards with the potential to cause electrocution, shocks or fires, could now be identified remotely including: Mains degradation due to bad connections and insulation breakdown; Broken conductors and live HV wire down events; Candling fuses; Incorrect meter wiring; Meter bypass event; Over-voltage events; Overload events; and Non-compliant solar installations.

While initially the benefits of Victoria’s smart meters were mostly related to safety and network efficiency (efficiencies which inevitably lower costs for customers in the long term), Victorian networks are now entering a new phase of benefits realisation which supports new products and services from retailers and other market players. This new wave is demonstrating that existing metering arrangements in Victoria provide no barrier to innovation.

The Victorian Government’s decision to defer metering competition is primarily driven by its starting position compared to the rest of the NEM. It’s also why comparisons with other markets, such as New Zealand, are irrelevant and unhelpful. With smart meters already in place, a move to metering competition in pursuit of unproven benefits would put those benefits already realised at risk of being lost or eroded over time. This wait and see approach is a sensible call, given the investment already made by Victorians in world-leading metering infrastructure.

A number of Victoria’s leading customer advocacy groups agree. In a 21 page submission to the Victorian Government, seven Victorian consumer advocates including the Victorian Council of Social Services and Consumer Utilities Advocacy Centre strongly urged the Government to defer the introduction of contestability[2].

“The value of the network management and safety benefits, and the potential value of the thus far underutilised customer-facing features that will underpin growth in the emerging behind-the-meter energy products and services industry, is too great to be risked through the adoption of an untested contestability framework. This is particularly the case when there is still no clear evidence of customer benefit from the framework in an environment where customers already have access to advanced metering infrastructure.

These customer advocates also urged the Government to heed the warning of the Victorian Auditor General so that: “Victorian consumers [can] be protected from additional costs associated with the pending rollout of new competitive metering processes and that essential (AMI) program benefits are preserved.”

The good news is that Victorians don’t need to wait for metering competition to access new product offerings and services that will be driven by big energy data.

Network service providers already offer energy platforms in Victoria today, and they have gone further. Portals such as United Energy’s allow customers to download consumption data; compare usage with other customers; set maximum daily consumption reminders; receive emails and text messages for unplanned outages in their area; and bind in-home display devices with their AMI meter. Some network portals such as CitiPower and Powercor’s myEnergy site also help customers to easily shop around and compare the offers of energy retailers, putting discipline on Victoria’s retail net margins. AusNet Services, sends customers with a grid-connected solar system an SMS when their smart meter readings indicate the customer’s solar PV installation is not exporting power to the grid. The SMS prompts the customer to check their installation is operating correctly.

Retailers claimed that “A market-driven rollout also ensures that the meter specifications can be based on the smart metering services that customers want.” However, it was customer advocates who warned the Victorian Government in November against the loss of customer benefits under the minimalist national framework, which provides no obligation for the meter to have advanced functionality and no obligation to provide the service even where the meter is capable.

United Energy has noted the potential for key differences in the national minimum requirements to undermine customer outcomes in billing quality and complaints, load control, uses of data and Government price comparators and last gasp functionality. 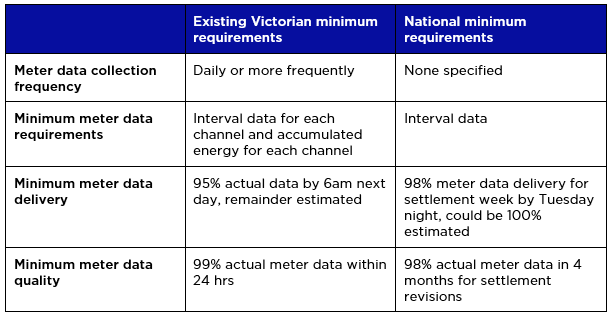 Competition and Customer Outcomes in Victoria

The Victorian Government decision on metering contestability highlighted that competition was not intended to be an end in itself but, a ‘means to the end’ of achieving better customer outcomes.

Victoria’s retail market is often recognised for levels of customer switching which approach 30 per cent, among the highest levels observed in global energy markets. Shouldn’t that be enough to confirm competitive markets are delivering efficient outcomes for customers? The Grattan Institute report, Price shock: Is the retail electricity market failing consumers?  recently demonstrated that despite high levels of churn:

“In Victoria, the profit margin for electricity retailers appears to be about 13% – more than double the margin regulators traditionally considered fair when they had responsibility for setting prices. Victorians would save about $250 million a year – about $100 per household – if the profit margin of their electricity retailers was the same as for other retail businesses.” [3] 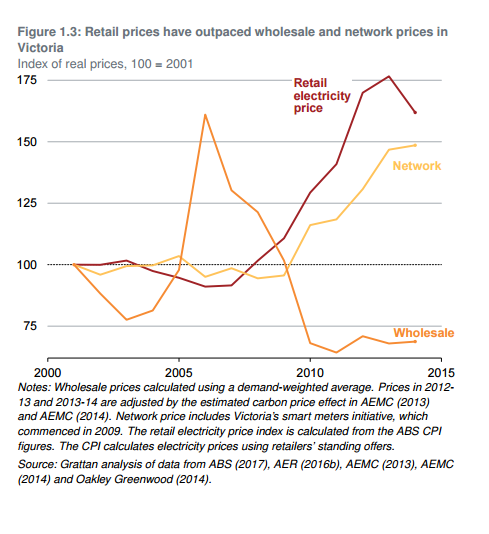 Recent analysis by the AEMC and the Preliminary Report of the Finkel Panel (Review of NEM Security) has previously recognised the difficulty in establishing clear information on retail costs and risk-based margins. However, the ACCC Review will have access to the full information gathering powers of the Commission as recently deployed in the review of Eastern Australian Gas Markets. The assessment has been welcomed by energy retailers as an opportunity to “bust the myth” as to why prices are rising.

By comparison, Victorian network businesses have performed well in delivering real cost reduction to consumers over an extended period. A recent report by Oakley Greenwood identified that since 1998: 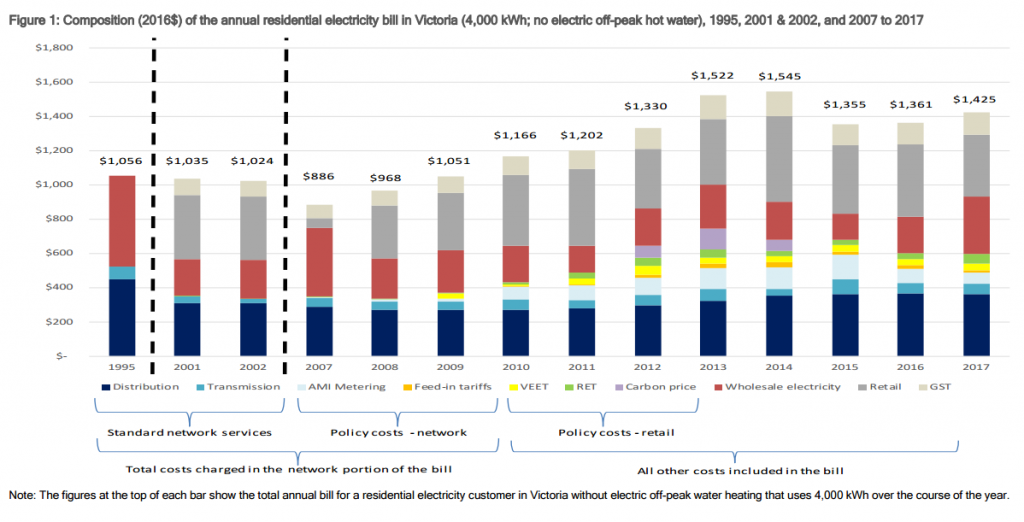 A number of customer advocates and regulators continue to recognise that segments of Australian retail markets are not subject to strong price discipline or competitive pressure.[5] The Chairman of the Essential Services Commission (ESC) Victoria, Ron Ben David, recently observed:

“Around us, we see markets with characteristics that force us to question the effective state of competition. Price structures are at odds with what we might expect in a highly competitive market….Retailers have developed contract arrangements that effectively ‘hide’ their actual prices. Customers have a very low awareness of the market, how they are engaging with it or what it really means for them.”[6]

A recently released Energy Consumers Australia survey indicated nearly half of all households in NSW and Queensland never having switched supplier (47 per cent and 52 per cent respectively) while even in Victoria, which is regarded as among the most competitive markets globally, 36 per cent of households have never changed their supplier.[7]

Energy Consumers Australia has also highlighted evidence that Victoria’s retail market also does not appear to reflect consumer preferences. In its submission to the Thwaites Review, ECA highlighted that high retail fixed charges did not appear to correlate with the network charge as observed by ESC Chairman Ron Ben David. This is reflected in the chart from Dr Ben David reproduced in the ECA submission and below. 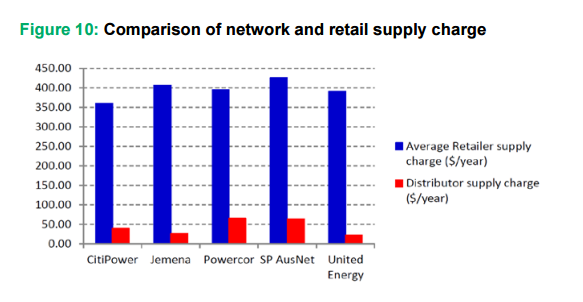 As the Chair of the Victorian Essential Services Commission noted, it is critical to distinguish between the ends (of efficiency) and the means of achieving this, which may be competition in some cases, and incentives in others.

[8] If the retail energy market is competitive then is Lara Bingle a Russian cosmonaut? Speech by ESC Chairperson Dr Ron Ben-David, June 2015 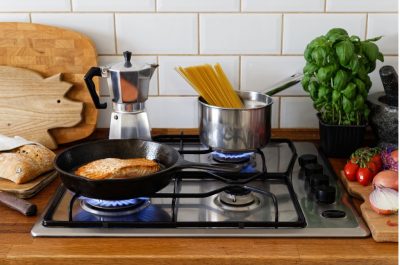