As the Senate Select Committee on Electric Vehicles looks at the opportunity for Australia, it’s critical we also consider the enabling infrastructure – Australian energy networks – as these are the poles, wires and pipelines to which electric vehicles connect.

There’s a massive potential for electric vehicles in Australia of which there are two versions. The commonly understood version, and commercially available in Australia, sources electricity from the grid and stores it in a battery. The alternative are fuel cell electric vehicles that convert hydrogen within the vehicle to electricity, to then power the engine. Hydrogen vehicles are commercially available internationally and will soon be available on the Australian market.

Both models have a strategic role in reducing greenhouse gas emissions from road transportation and are a key component of Australia’s transition to a clean energy future.

Supporting the commercial roll out of electric vehicles on our roads will require careful planning of energy infrastructure to ensure we can continue to deliver reliable, safe and secure energy to our customers. We strongly recommend that policy makers involve energy network businesses early in the process to help governments maximise the benefits of increased electric vehicle uptake, and feed into logical policy decisions and avoid unintended outcomes. 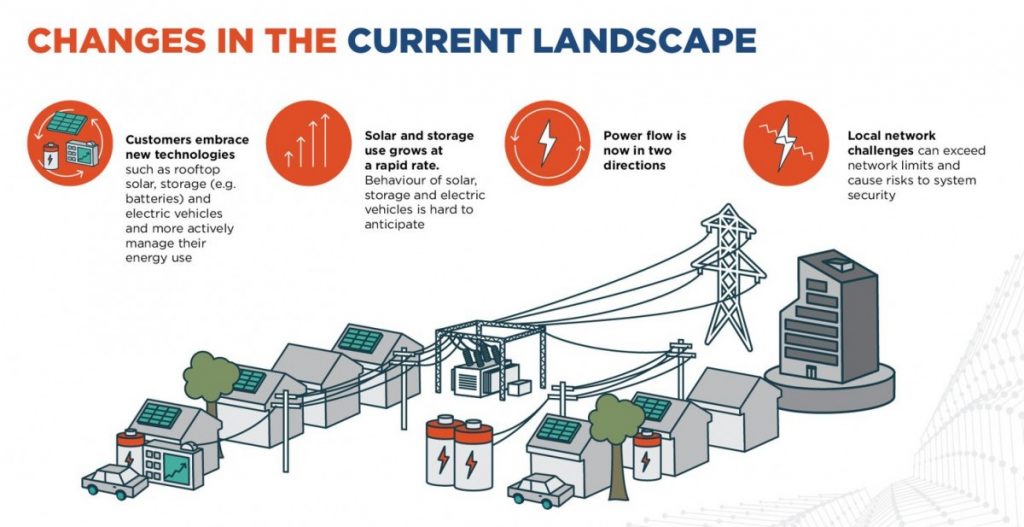 Energy Networks Australia is currently collaborating with the Australian Energy Market Operator in developing a co-ordinated approach to improve the electricity system as it transforms to meet the changing demands placed on the grid. This diagram shows the changes in our grid from a one-way energy system to a two-way power flow.

The Open Energy Networks project is about how to best integrate household solar and storage, as well as electric vehicles, into the grid, so they can work in harmony and help ensure quality and reliability of supply. This work will also consider the role of hydrogen production units as a means to balance the grid. Overall, the project attempts to consider a systems approach linking electricity, gas and hydrogen fuels to achieve the best outcomes for customers.

To illustrate the spikes in demand, this graph shows how demand in the grid changes over the course of a week in January. This will be further exacerbated by an increase in poorly orchestrated integration of electric vehicles. 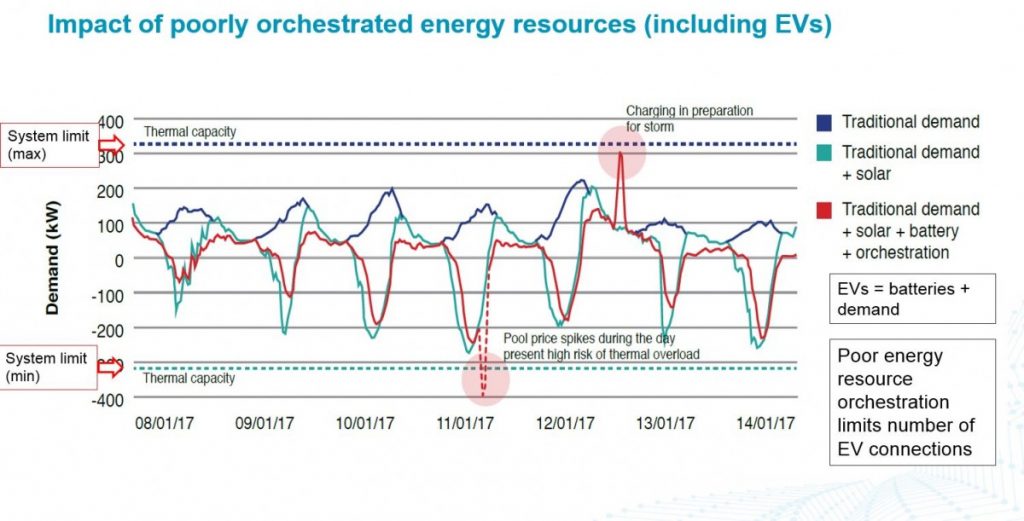 If done well however, electric vehicles present an opportunity for our nation. If their rollout is managed with proper network industry consultation and consideration, a number of risks and challenges can be worked through so we can deal with these issues of peak demand charging.

The two most common approaches to refuelling vehicles would be through either household refuelling points, or via fast charging infrastructure, similar in function to current petrol stations. Both options place different demands on networks, however it is only one aspect of a rapidly evolving power system, which requires increasingly complex orchestration of energy demand versus supply to maintain energy quality and reliability at an affordable price.

The problem lies in that Australia’s distribution networks and their supporting regulatory frameworks were not designed for the significant uptake of electric vehicles and the consequential demand for charging. 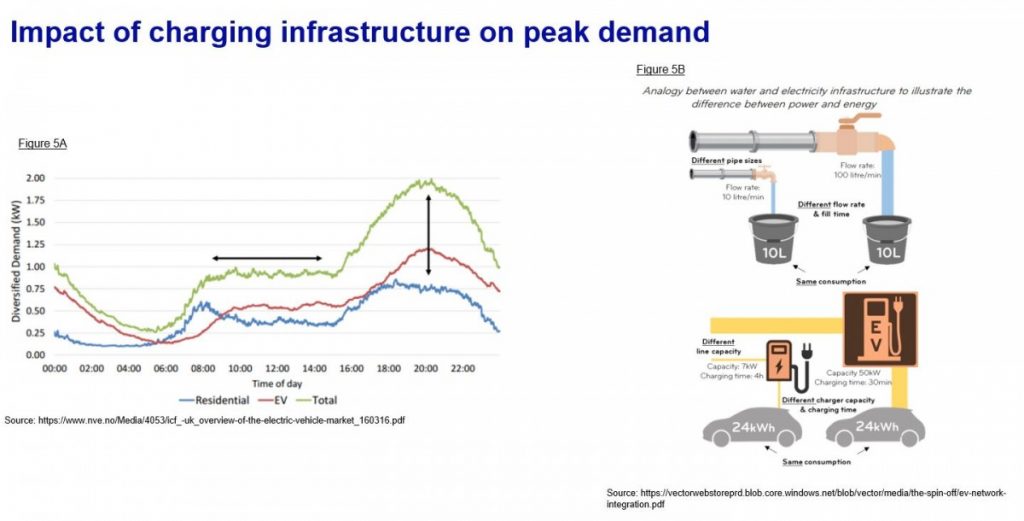 As shown here, charging creates two immediate challenges relating to demand, which need to be considered: the timing of when people will charge their car and the size of the charger they use.

For example, based on the UK experience electric vehicle charging more than doubled the demand on the electricity network at the peak time of 8 pm when people return home and plug in their cars, in addition to using other energy intensive appliances as they cook dinner and put on a load of washing for example. This doubling of demand has major implications for the design and management of the grid, and if not managed appropriately, could lead to the system breaching its current capacity during times of peak load.

In simple terms, major investment in infrastructure would be required to meet this demand, but it would only be used for a very short period of time. It is similar to the air conditioning peak demand in Australia on hot days.

Without a proper management framework, networks would be forced to make costly investments in infrastructure, to ensure reliability and this may push up network charges, leading to higher bills. Network businesses want to avoid this scenario – never has there been more pressure to reduce power prices with this issue firmly on both the public and political agenda.

If these issues are properly considered, the roll out of electric vehicles could:

But done badly, EVs could lead to worsening load profiles which trigger one of more of:

Let’s work together to ensure none of those things happens.