Australia’s energy choices often seem focussed on a battle between coal and renewables, particularly in the current polarised election campaign period. While gas is often the forgotten piece in Australia’s carbon policy jigsaw, in Europe gas is playing a vital role in energy security and emissions abatement.

Natural gas is complementary to renewable energy and can enable greater adoption and transition to a lower carbon economy. The versatility, price and performance characteristics of natural gas make it the best fuel to partner with renewable energy sources in multiple ways. [2]

The Support for Variable Renewable Generation case study highlights the ability for short term, daily or seasonal variations in renewable energy output to be matched by gas fired generation. One of the figures included in this case study shows the daily variability of wind power at a wind farm, ranging between zero and 600 MW on different days of the month. 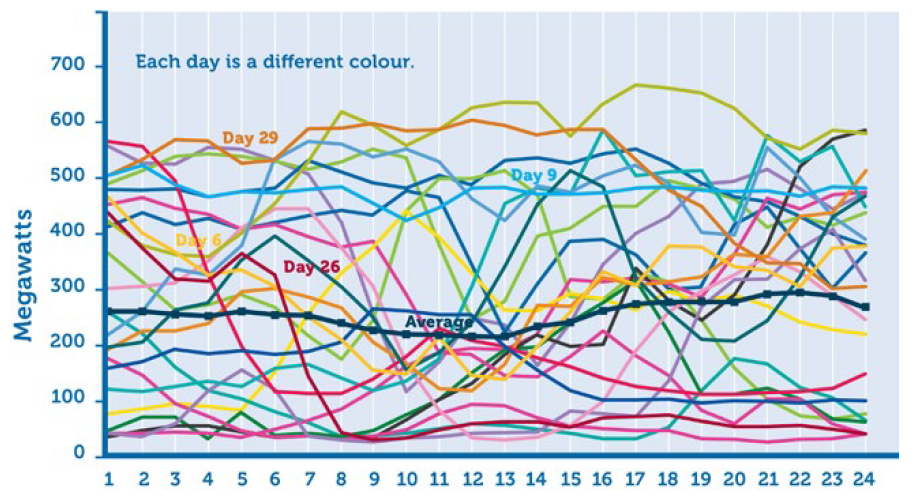 The IGU report also highlights an Integrated Distributed System case study, where gas is used as part of an integrated distributed system, allowing thermal energy applications to be incorporated through, for example, combined heat and power or using thermal energy storage (e.g. hot water). Gas-fired Combined Heat and Power systems are commercially available and, while recognising Europe’s heating load and energy markets are quite different to that of Australia, it is significant that CHP systems identified in the IGU case study are achieving efficiencies of 60 to 80%. Australia currently has over 3,338 MW of CHP (in the form of co-generation and tri-generation) installed[3], including in places such as at the Little Creatures brewery[4] in Geelong, Victoria.

The IGU also provides case studies on biogas and power to gas, both of which are technologies utilising renewable energy sources. Biogas can be produced from any organic material (typically forestry waste, crop residues or municipal solid waste) through digestion or gasification processes. Since the gas is produced from an organic material, it becomes a renewable energy source. Power-to-gas processes convert electrical power to either hydrogen or natural gas. It therefore provides an opportunity to store excess renewable energy that could not be dispatched into the grid (due to load management issues). Injecting this gas into gas networks provides energy storage using existing infrastructure and is currently being demonstrated in Germany, where 140 plants are injecting biogas into the grid.

In the United Kingdom, the “Biomethane to Grid” market has grown from one biomethane plant injecting gas into the gas grid to 63 plants producing an estimated annual biomethane production of 3 TWh. A Green Gas Certification Scheme has been introduced by industry participants to provide an objective means of tracking the commercial transactions of biomethane through the supply chain.

While Australia generated 3,200 MWh of electricity from biomass in 2015, this occurs through the conversion of organic mass to a ‘syngas’, which is burned directly in reciprocating engines for power generation, rather than cleaning the gas and injecting it in the gas networks. At this stage, there are no Australian projects injecting biogas into the gas network.

GEODE, the voice of local energy distributors across Europe, produced A Sustainable Europe: Green Gas, Green Grids, Green Future[5] describing the use of gas as an energy source in Europe and focussing on green gas having an underpinning role in a low carbon world. They use the term ‘Green Gas’ to describe all forms of gas produced from renewable sources, including biogas and biomethane from digestion processes, but also gas from gasification and other processes. GEODE members see biomethane as a clean and renewable source of energy (as it is carbon neutral), which can help the EU meet its climate targets. They make five key observations regarding Green Gas:

The cases studies describe nine European facilities where Green Gas is produced or used. These are summarised below.

Much of the focus since the Paris COP meeting has been on achieving temperature targets of less than 2°C, with an aim for 1.5°C. In many instances, this has been interpreted as a move towards 100 per cent renewables for power generation. However, the Centre for Energy and Environmental Markets[6] (at UNSW Australia) makes the observation that this level of renewable energy would require a level of synchronous generation, such as hydro, Concentrated Solar Power, biogas turbines and geothermal energy to complement the non-synchronous generation such as solar PV and wind.

Gas is recognised in international markets as a key low-emissions, synchronous source of power generation. Current technologies can further reduce emissions by producing renewable gas or utilising the gas grid for renewable energy storage, which means gas could play a central role in a cleaner energy transition for Australia.

The challenges being caused by the loss of synchronous generation has received appropriate focus from the Australian Energy Market Operator and transmission networks like Electranet, who are also exploring the role of interconnection and battery storage.

These complex challenges won’t be simplified by picking a single technology solution, generation type or by setting a mandated quota of gas-fired generation or renewable generation.  A careful evaluation of energy market design and integrated policy frameworks will be needed to ensure technology solutions compete on a level playing field to deliver the outcomes needed by Australian consumers.  Policy and regulatory frameworks which are outcome based, science led and technology neutral are more likely to avoid unacceptable customer impacts on any dimension of ‘the energy trilemma’ – affordability, sustainability and reliability.