The Queensland Household Energy Survey findings have been released just as Enphase Energy said its partners in Australia and New Zealand had ordered 60,000 units of its new Enphase AC Battery, twice as many as expected.

The latest Queensland Household Energy Survey, conducted on behalf of Energex, Ergon Energy and Powerlink Queensland, shows awareness and intended uptake of household battery storage has increased significantly in both south east and regional Queensland, although consumers underestimate its cost, as demonstrated in Figure 1 below.[1] 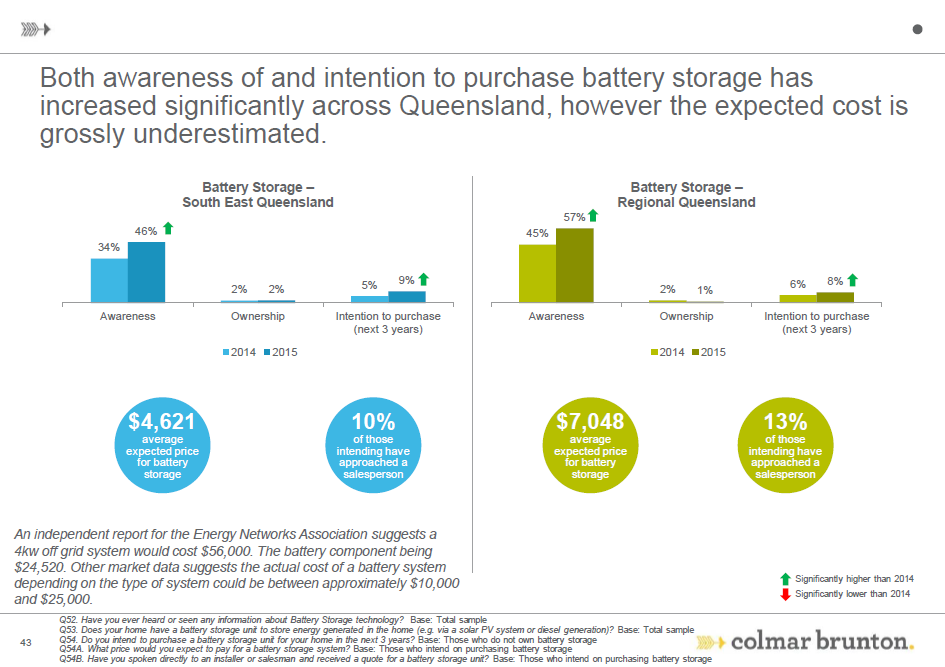 Colmar Brunton’s Insights Report finds that “increased interest in the uptake of battery storage will not present a trend in the short term; until the purchase cost decreases significantly and consumers feel it is a financially viable option”[3].

The Report says that, while increasing awareness and intended uptake is being driven by positive word of mouth and Queenslanders understand the benefits of battery storage (demonstrated in Figure 2 below), an increasing number (up from 24% in 2014 to 35% in 2015 as indicated in Figure 3) consider battery storage to be too expensive or having a too long payback period.

In 2014, 63% of survey respondents indicated that a key motivation for purchasing battery storage was “to stop my electricity bill increasing”. This fell to 53% in 2015 (Figure 2). 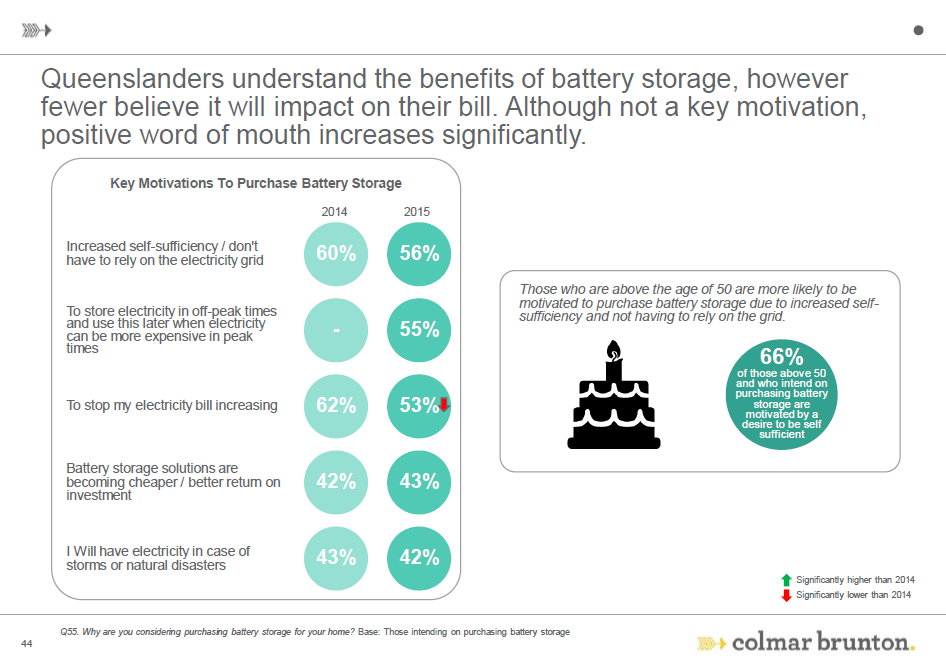 The survey identifies (Figure 3) some concern about the safety of battery storage systems (up from 6% in 2014 to 14% in 2015), which was most prevalent (i.e. 28%) amongst those who currently have solar PV installed. 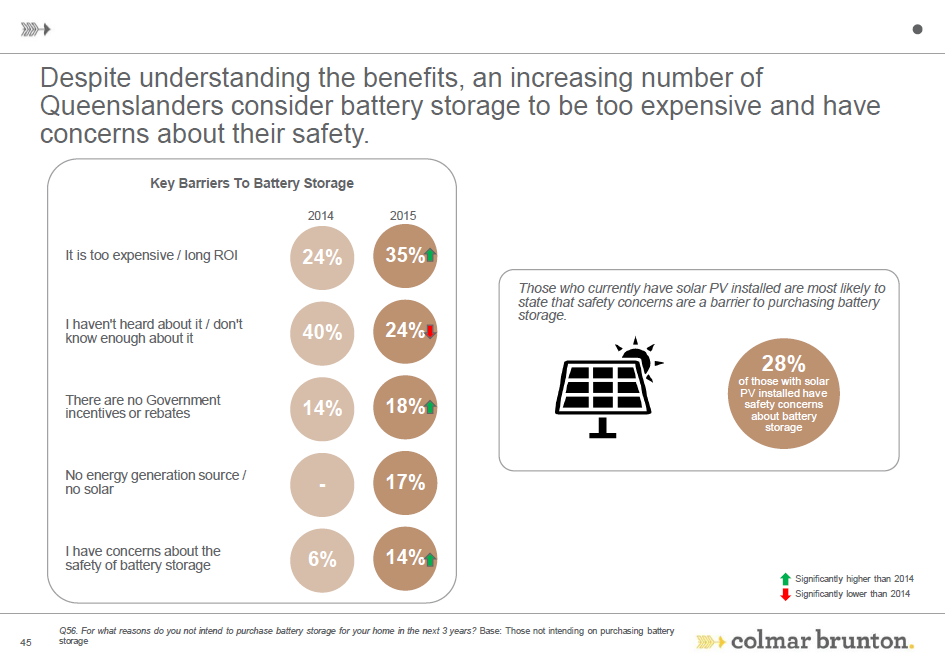 The report suggests that “among those who currently own solar PV, intention to purchase battery storage is slowly increasing, though most remain undecided”[4] and the uptake of batteries will remain low until the price falls within expectations.[5]

The early adopters of battery storage will most likely be high income and current solar PV owners on the retailer funded FiT. This group are already highly engaged with their electricity usage. Once the price has decreased sufficiently, the battery market will be driven by those looking to purchase combined solar PV and battery systems. This second wave of battery storage purchasers are also considering a number of solutions to bill concern such as switching tariffs and purchasing gas appliances.[6]

The CSIRO report, Future energy storage trends, prepared for the Australian Energy Market Commission last year, identified the potential for significant growth in battery storage, despite the service not representing an immediate prospect for most consumers.

The CSIRO analysed future energy storage trends over the period 2015-2035 and assessed the economic viability and potential uptake of battery storage systems, and concluded that “energy storage could be viable for households in 7 years under current tariff structures”[7], while noting:

The economic viability of storage is sensitive to region, tariff structure and whether PV is already installed. Different views on what may constitute a reasonable payback period for a residential customer are also relevant.

CSIRO explored the economic viability of battery storage for a number of end‐use cases for residential customers and found, for example, that:

There were interesting signs in the Queensland Household Energy Survey that Queensland’s structural energy efficiency is increasing, as consumers replace appliances with newer technology, however, they are engaging in less energy efficient behaviour, including in relation to the use of air conditioning.[8]

Increased usage at lower temperatures and increased night time usage, will continue to increase demand on the network even at off-peak times.[10] 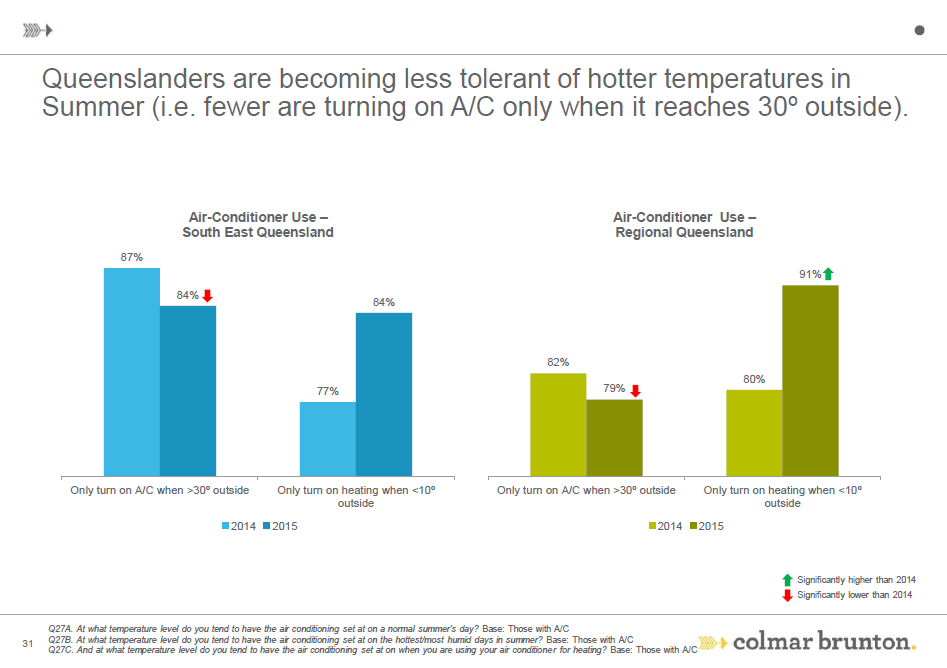 The report says “there is a sense that Queenslanders are less engaged with their electricity consumption”[11], though a large proportion indicated they are either willing to change their time of use or already have, suggesting an appetite for a time of use tariff.

Storage Trends: An Assessment of the Economic Viability, Potential Uptake and Impacts of