The AEMO Electricity Statement of Opportunities 2018 (ESOO) was released late last week and has created a frenzy of media implicitly seeking guaranteed supply in all conditions.

The ESOO forecasts electricity supply reliability in the National Electricity Market (NEM) over a 10 year period to inform decision making processes for market participants, investors and policy makers. AEMO undertake extensive analysis and consultation on the inputs to the ESOO forecasts and the demand forecast in this 2018 ESOO is higher than the more neutral demand forecast used in the recent Integrated System Plan (ISP).

Forecasts of supply take into account existing and committed generation, the (reducing) reliability of existing aged coal based plant, size of interconnectors and the ability to supply across regions. On the demand side, the forecasts take into account the state of the economy and consumption in the manufacturing and retail/small business sectors, weather conditions, population growth, customer energy behavior and appliance and housing energy efficiency, the uptake of electric vehicles, solar panels and batteries.

The reliability standard established in the NEM is that unserved energy (USE) should not exceed 0.002 per cent of total energy consumption in any region in any financial year. The unserved energy is the energy that cannot be supplied to customers resulting in involuntary load shedding or loss of supply as a result of insufficient generation capacity, demand response or network capability to meet demand.  In other words, 99.998 per cent of the time demand is expected to be met or exceeded.  There is no guaranteed energy supply as supply is more often impacted by storms, lightning strikes, bushfires and floods and other network incidents.

The reason the unserved energy target is not 0.000 per cent is simple economics – it would cost a fortune in back-up supply options to try and meet a zero target and even then you couldn’t guarantee it.

Under the neutral demand scenario and talking into account existing and committed generation projects, the unserved energy is not expected to exceed 0.002 per cent in any region in the 2018/2019 summer. Based on the graph below, Victoria is marginally below the 0.002 per cent reliability standard. 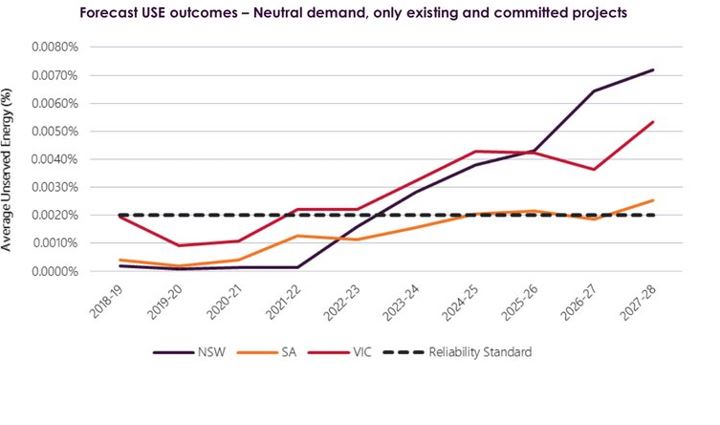 So some guaranteed blackouts then?

Well, no. Despite AEMO being quite clear in their press release, the media frenzy failed to note that AEMO is already actively engaging with state governments in the affected regions to help ensure that the reliability standard is met.

The long notice Reliability and Emergency Reserve Trader (RERT) has recently been re-instated as a safety net to help mitigate scarcity of supply. This existing reserve mechanism allows AEMO to procure strategic reserves which are not already available in the market to better manage the scarcity of supply. AEMO is already evaluating tenders to procure RERT for this summer across Victoria and SA.

If high temperatures above 40C in Victoria are experienced, particularly if it happens multiple days in a row, this could result in very high electricity demand, particularly towards the end of the day where business is still operating, residential demand is increasing and generation from solar is declining. The ESOO states that under these (worst in 10 years) conditions about 380MW of additional balancing and firming resources (supply or demand) across Vic and SA combined would keep that year’s unserved energy below 0.002 per cent. This, however, is not how the reliability standard is defined, which is a weighted average of 0.002 per cent across all demand scenarios.

AEMO reported on the “Summer 2017-18 operations review” in May 2018. AEMO has addressed these reliability gaps before and highlighted a number of actions to improve generation availability, maximise transmission network availability and other forecasting and operational improvements.  For last summer, AEMO was able to increase generation and demand response in the following manner:

In the case of Victoria, Citipower and Powercor provided 130MW of demand response through smart meter voltage reduction in the summer of 2017/18, with potential to provide up to 300MW.[i] Other Victorian distributors could add a further 200MW capability through voltage reduction.

The voltage reductions would go completely unnoticed to customers, with no discernible impact on household appliances. While this is good news for Victorians, sadly most metering systems rolled out in other states do not have this functionality.

Smart meters also offer a range of other features such as customer opt-in demand response, supply limiting features, potential for appliance level load control of air conditioning or pool pumps or even customer selected load shedding which has the potential to avoid involuntary load shedding across community required infrastructure (traffic lights, public transport, hospitals, emergency services). Consideration could be given to better utilising these features for demand response.

Strategic reserves were deployed last year and can be procured and deployed again this summer if warranted. These market mechanisms are in place and working.

In the longer term?

AEMO released the Integrated System Plan which projects a range of generation, storage and transmission investments to meet reliability and security in the NEM at the lowest resource costs. The ESOO notes that with neutral ESOO demand and an ISP with neutral development plans, the unserved energy of 0.002 per cent will be met.

As the COAG meeting in August 2018 noted, the ISP needs to be turned into an actionable plan so the emerging reliability gap is managed in a coordinated manner and not just via contracting using the reserve mechanisms.

It is critical that the investment environment and the policy and regulatory arrangements are capable of supporting a smooth transition to replace resources as existing generation assets retire. Low regulated rates of return in a changing political and technology landscape may not facilitate investor confidence for the necessary infrastructure.