When people think about gas, they generally relate it to in-home comforts such as cooking, heating and hot water. However, gas is used in many applications outside of the home, including generating electricity, space heating, steam production and as an essential feedstock for manufacturing industries.

Gas is also used in public transport, especially in CNG bus fleets, where Australia has been described as a world leader, after France, in the penetration of CNG buses. More than 4,100 CNG buses[1] are in operation around Australia following strong growth in CNG bus numbers from 2006 to 2012, making a significant contribution to reduced greenhouse emissions and air quality. 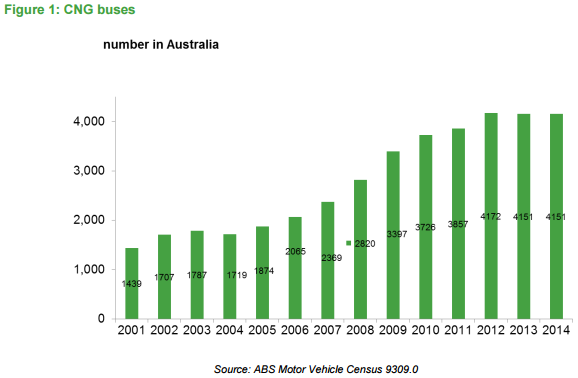 There is a significant growth opportunity for gas in the transport sector in a decarbonising economy, especially as it provides a clean, quiet and cheap alternative to diesel use in buses and heavy goods vehicles (HGV). Compared to diesel alternatives, natural gas engines produce fewer emissions, have a lower carbon footprint and are 50 per cent less noisy. They also outperform the Euro 6 standard for diesel engines on NOx[2], sulphur oxide, particulate matter and CO2 emissions.

These benefits were recently summarised by Gas Energy Australia[3]: 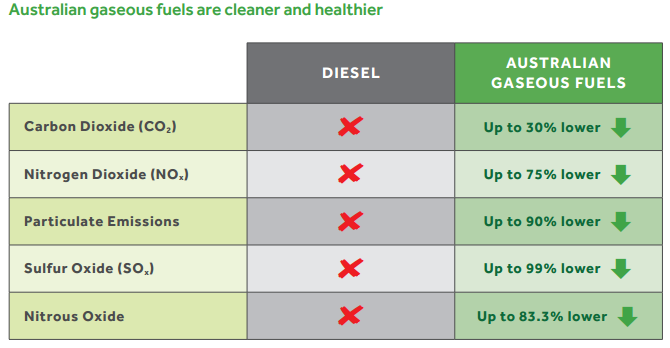 National Grid (UK)[4] recently noted in The future of gas: Transport that there are over 18 million natural gas vehicles (NGV) globally with over 65% of those vehicles in five countries: Iran, Pakistan, Argentina, Brazil and China as demonstrated in Figure 3 below.[5]

National Grid notes that the freight sector is taking renewable and low carbon energy sources seriously and this is where gas vehicles, and/or using renewable gas as a fuel, can play a key role. Generally, a cost benefit can accrue to gas-fired vehicles due to lower fuel costs. In recent years though, the cost benefit has eroded somewhat due to a drop in the price of oil, which has increased the payback period for gas-fired vehicles compared to diesel vehicles.

National Grid indicates that its gas distribution network, with 284,000 km of pipes, has sufficient capacity to support a UK-wide chain of refuelling stations. It predicts that the transport load in 2050 will be 6 per cent of today’s demand.[6] It also sees a major opportunity in using bio-SNG (Synthetic Natural Gas) in its networks, which could also be used to power commercial vehicles, making the link between renewable energy and transport.

A McKinsey and Company  analysis[7] of the role of natural gas in Australia’s energy mix identified eight growth opportunities, five of which are in the transport sector. (See Figure 4 below.) Each opportunity involves commercial road, rail or shipping transport and would be economic with a combined benefit of $1 billion in 2030 – mainly due to savings in fuel costs.

Figure 4 – Opportunities for gas in the transport sector[8] 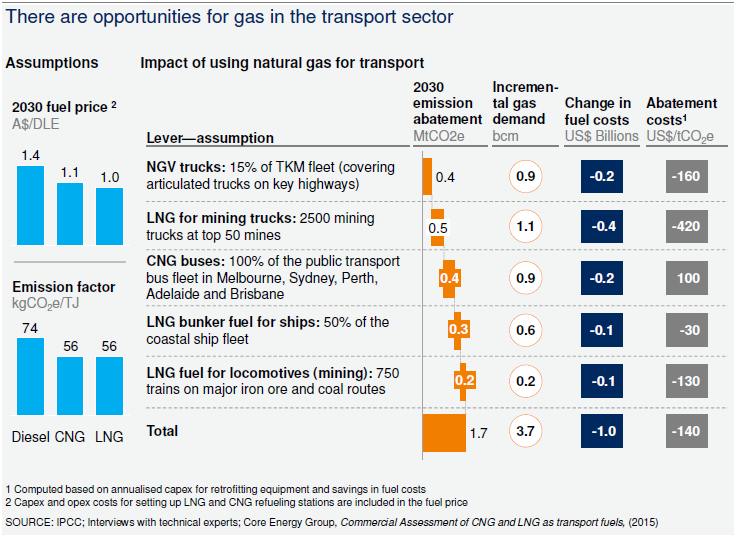 Additional benefits accrue from CO2 emissions abatement of approximately 1.7 million tonnes. The opportunities identified by McKinsey mean an incremental increase in gas demand of 144 petajoules (PJ), or 3.7 billion cubic metres (bcm), from a base of 1,400 PJ in Australia in 2014, across industry, power generation, LNG and residential and commercial use. Additional growth in gas consumption is expected from LNG liquefaction (233 PJ), industry (78 PJ) and residential and commercial use (39 PJ) for a total gas demand of approximately 1,940 PJ (50 bcm) in 2030.

Gas Energy Australia has recognised challenges to the take-up of gas vehicles in Australia, recommending a 10 point action plan for industry and government[10] including:

Recent analysis[11] undertaken for the Energy Networks Association indicated payback periods of less than 2 years to over 4 years for light duty trucks and vans, noting that savings are dependent on the price differential between gas and petrol/diesel, on an energy equivalent basis, and the distance travelled per year. As shown in the table at Figure 5 below from Australia’s Bright Gas Future: Competitive, Clean and Reliable, commercial vehicles covering distances of 75,000 km and above have payback periods of less than 2 years. 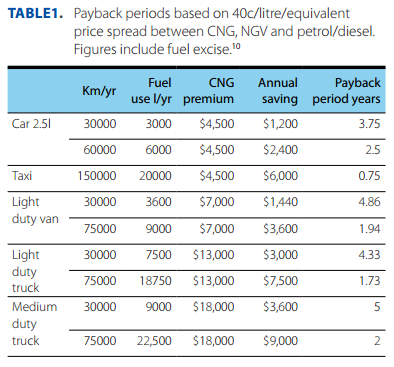 [2] Nitrous oxide is an undesirable product from combustion and a prime factor in photosynthetic smog.