This month, Western Power introduced a “Fish and Chip Shop” initiative for customer connections. It was prominently reported in WA media, complete with puns about ‘casting the net wide’ for ‘tailor-made solutions’.

Using a customised software tool and big data analytics, Western Power has been collecting and comparing electricity consumption data from businesses in the same industry, like say, fish and chip shops.

It’s been able to reduce connection costs for customers by up to 90% – in turn, saving customers tens of thousands of dollars, by getting closer to the real electricity use of customers in specific industries.

The software relies on electrical data from hundreds of customers to inform an industry-based view of the electricity use of a typical customer.

“We are now able to more accurately forecast peak electricity demand for businesses based on their industry sector. This means we can build the network to meet actual peak demand, not maximum demand.” Guy Chalkley, Western Power CEO

Sophisticated consumption analysis is a fast growing opportunity to create shared value with customers. It’s increasingly employed by incumbent utilities, software-as-a-service providers like Opower, Autogrid, Wattwatchers, Pooled Energy and Edge Electrons  – to name a few. They are just part of a wider utility analytics market which Navigant estimates is growing at a compound annual growth rate of 16%, to reach $3.6 billion globally by 2025.

This week, the CEFC announced it would invest $2 million in Wattwatchers, or half the capital raising needed to expand production of its measurement devices which won the Australian Technologies Competition New Energy Award last year.

The technology is a clamp-on internet device which provides a data-feed highlighting retail time energy use at the home, business or industrial location. It’s particularly valuable for customers with solar PV systems and hot water systems enabling them to avoid waste or underperformance.

How will companies turn big data into information which supports customer decisions? Significantly, Wattwatchers has indicated its next step is to include a free, simple home energy management app with its devices, including an online budgeting tool with alerts to save money and reduce emissions.

The ECA-funded report by the RMIT Centre for Urban Research released this week, Smart Home Control, evaluated the lived experience of over 40 households with smart control devices such as smart switches, light bulbs and plugs. Choosing devices commonly available for major retailers, the study assessed a broad range of households beyond just early adopters.

The RMIT study found that, among those customers who were left to self-install the devices:

The study provides a range of insights about the motivations for customers using smart controls – suggesting low interest in time-shifting to save money and an attraction to lifestyle benefits.

When planning for demand response programs the study found “One size does not fit all”, stating:

“Future planning is needed for scenarios where households are less engaged (on a daily basis) with energy consumption due to more set-and-forget technologies and home automation.”

A Better Understanding of Customer Personas

So if “one size doesn’t fit all”, how are energy service providers supposed to understand the different needs of their customers? Ground-breaking research by a QUT and CitySmart consortium has provided a new way of thinking about customer archetypes, segments and preferences.

Our intent is to:

In a report titled, Taking Advantage Electricity Pricing Signals in the Digital Age, the group provided insights on how customers engage with energy choices and pricing, creating a new customer segmentation model.

The study applied ‘design thinking’ and a consumer-centric approach. Rather than socio-economic groups or household formation, the study proposed Consumer Personas based on observed character traits in quantitative and qualitative research.

They focussed on group dynamics and chose Animals for the Personas, to be less pejorative and age-neutral, gender neutral and culture neutral –

There are great insights in the research, informed by the quantitative research and the customer segmentation model, which informed critical factors to be addressed when considering the implementation of new electricity pricing plans.

The report highlights the importance of recognising that households operate as “buying centres” in which different household members play different roles in decision-making and that those roles change. Design thinking informed the value proposition for each segment, informed by the Goals and Barriers that were relevant to the customer cohort being considered. 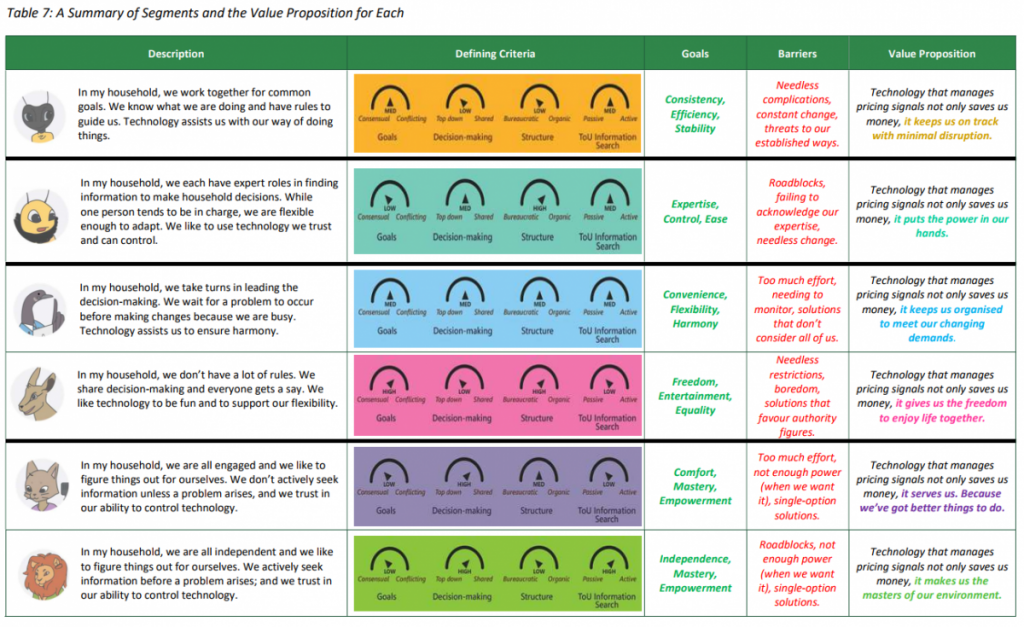 Do Customers want Set and Forget Solutions – or Interaction?

Similar concerns were voiced in the RMIT study by some customers who has been involved in the Self-Install Trial.

Both studies have highlighted the need for further research and analysis of the real lived experience of customers using new technologies, energy products and solutions. In fact, despite the increasing availability of big customer data and smart grid analytics, the evidence base which informs out understanding of customer preferences and experiences may be most critical to the success of the future energy system.