The amount network businesses can earn on their infrastructure investments – the regulatory rate of return or WACC (Weighted Average Cost of Capital) – is one of the most important settings in Australia’s energy market. The rate of return is currently under review by the Australian Energy Regulator, which has made a draft decision that will, if implemented, have some significant consequences for customers.

Rate of return – why it matters for energy customers

The Rate of Return Guideline review is tasked with establishing an appropriate rate of return setting that will affect about $100 billion of gas pipeline and electricity poles and wires infrastructure. The approach set in the review determines the level of allowed return on all existing network assets and new investments made that can be recovered through regulated charges.

This decision is a critical input to the network investments needed to deliver safe, reliable services to customers and capacity to those seeking to connect with the energy grid. The rate of return recognises that network businesses must continuously finance investment to refurbish, expand or upgrade network assets to continue to deliver valued services. The recent Australian Energy Market Operator Integrated System Plan identified that new network infrastructure can help deliver $1.2 billion in customer savings compared with a ‘no new build’ scenario.

Australia’s energy network sector relies on existing and ongoing long-term private sector investment, which is underpinned by efficient and ready access to debt and equity capital. While investment levels have fallen significantly in the past decade, network businesses anticipate they will still need to make about $6.8 billion of new capital investment a year over the next five years in order to maintain services, accommodate required upgrades and facilitate new connections – including new renewable connections. Privately-owned networks are likely to face a total private debt financing task of about $4.4 billion a year to underpin the efficient financing of existing assets and of new, regulator-approved capital investment programs. To put this in perspective – this is equivalent to raising about 9000 average-sized home loans every year.

The regulator’s draft guideline decision proposes the largest reduction in regulatory returns in more than a decade of energy network regulation, delivering a proposed return on equity of 6.3 per cent. This is less than half what it was just 10 years ago (See Figure 1). 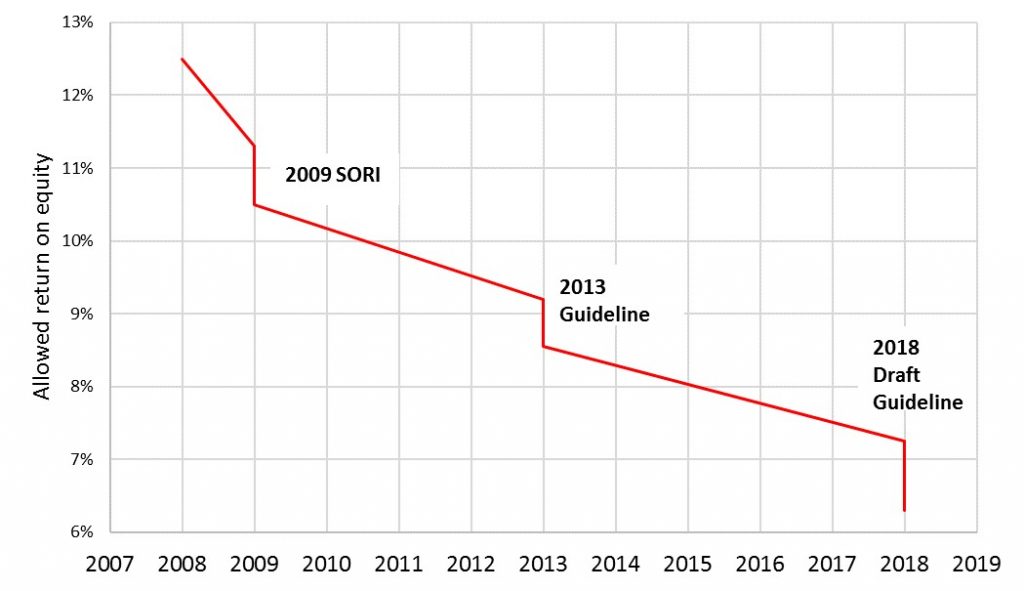 If what is proposed is implemented, network businesses will lose more than $450 million each year on what they are allowed to recover on past and planned network infrastructure. Many networks are already investing less than assumed regulatory benchmarks. Further pressure on regulated returns is likely to reinforce this widespread pattern, potentially constraining networks’ capacity to serve as a platform for greater wholesale competition and their ability to invest in smart enabling technologies to support new services. Just as seriously, failing to get the balance of this decision right by creating regulatory risk can cost consumers in future bills by locking in higher than necessary regulatory risk premiums – charged by financiers but ultimately paid by customers.

This guideline making process has several important differences from previous approaches. First, the AER’s decision is binding on all parties and the outcomes in the guideline cannot be adjusted for four years, under any circumstances. Second, the AER has conducted an expanded consultation process featuring joint expert sessions and an independent panel review of its draft guideline decision is underway. Finally, the AER has used a fundamentally different approach than previously, moving away from core parts of its ‘foundation model’ process to setting allowed returns, an approach designed to ensure an balanced outcome based on factual, expert input and market data. This has resulted in a dramatically lower return on equity assumption.

At the AER’s recent public hearings on the draft guideline, consumer groups and the AER’s Consumer Challenge Panel unsurprisingly indicated broad support for the AER’s decision. Networks and investor representatives raised strong concerns with the decision outcomes and queried the assessment of the expert evidence provided to date. Networks pointed to the significant revisions being made across key areas as representing a marked and unsignalled departure from past approaches that was inconsistent with the original agreed concept of an incremental review giving weight to updated market data and evidence. 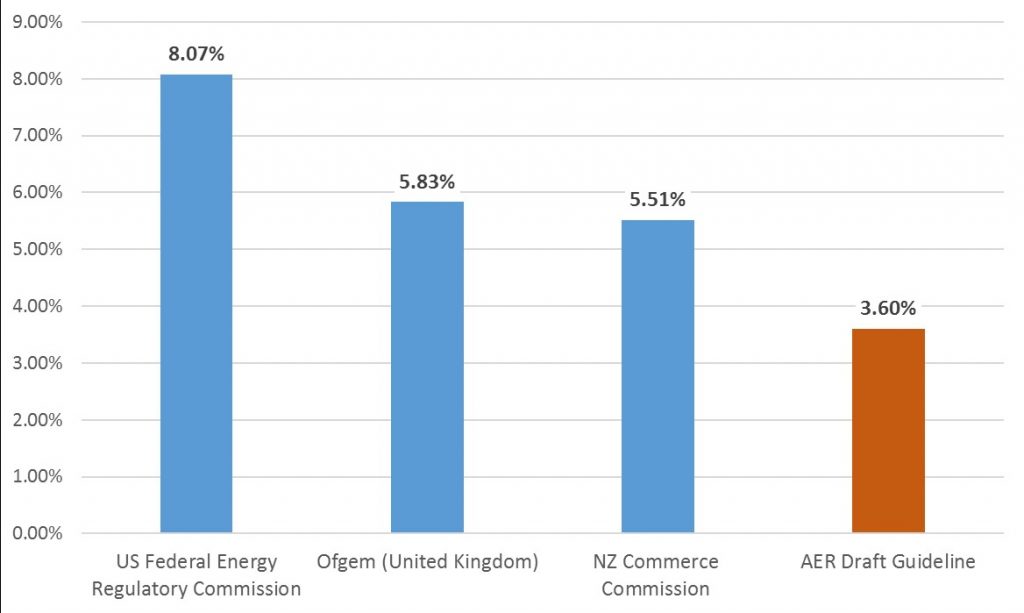 Note: The premium represents the real equity return available to provide a like-for-like comparison, and takes into account that bond yields differ between jurisdictions

The review is now taking further evidence and the AER’s independent panel is tasked with reviewing the approach and reasoning in the draft guideline. Following the AER’s final guideline decision in December, it will be required by law to apply its binding guideline outcomes to all network determinations over the next four years.

Much can change in four years, but something that will not change over that time is the critical role a balanced, predictable rate of return approach must play in supporting the investment that keeps Australia’s energy consumers connected and able to play their vital role in a transforming energy market.