The Australian electricity system was founded on centralised, carbon-intensive coal-fired generation. The average lifetime of a coal powered plant is 29 years although its design life is 40 to 50 years. About three-quarters of Australia’s coal-fired power stations are operating beyond their original design life and some have had extensive refits [1].

Age is the major factor leading to coal plant closure. These old generators are inefficient and carbon intensive. Since 2016, 2.8 GW of coal capacity has retired including Victoria’s Hazelwood Power Station, decommissioned in 2017 because it was not economically viable and had reached the end of its productive life.

As with any old asset, reliability is declining. Earlier this year, AGL’s generator at Loy Yang A brown coal-fired power station unexpectedly tripped offline. It is also expected that Yallourn power station could close much sooner than its scheduled 2032 retirement. To add further pressure, Origin’s Mortlake gas power generator was damaged earlier this month and will run at half-capacity until December 2019. All this has led to 2,133 MW of thermal power now being offline [2].

According to Australian Energy Market Operator’s (AEMO’s) Integrated System Plan (ISP), it is expected that 14 GW of coal-fired generation will reach the end of its technical life and retire by 2040, as shown in Figure 1. Those retiring currently generate 70 TWh, which is equivalent to one-third of current total National Electricity Market (NEM) consumption [3].

With demand for summer cooling expected to continue to grow from last year, the gap created by retiring coal needs to be filled. The question is who will step up to fill this gap and will the alternatives have enough capacity to meet summer demand?

The Rise of Renewables

Figure 2 compares the average change in generation by fuel supply from Quarter 1 (Q1) 2018 to Q1 2019. Solar, wind and gas generation increased drastically, while coal-fired generation reduced due to reduction in its average availability and displacement by solar during the day. 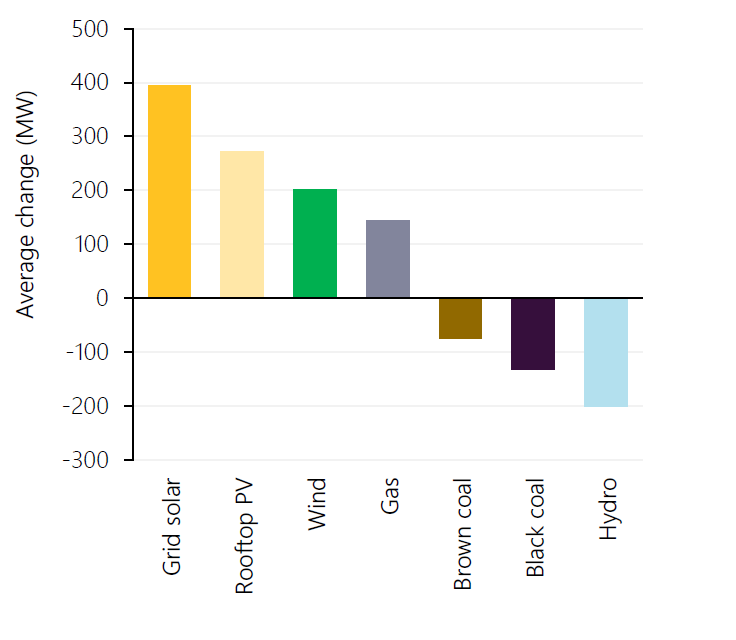 Getting the Right Future Energy Mix

Building renewable generation has become the cheapest source of new electricity supply. Currently in Australia, new large-scale wind or solar generation costs about A$55-90/WMh to build, with costs expected to continue to decline.

But solar and wind are variable energy sources and need energy storage and demand-side response to support the grid and manage peak demand. Over the next decade, energy storage at large and small scale will be critical to delivering supply flexibility and reliability.

Hornsdale Power Reserve in South Australia remains the world’s largest battery and has supported the NEM marvellously, but in MWh terms its storage capacity remains a small fraction of SA’s consumption. Snowy 2.0 and Battery of the Nation can also provide large-scale pumped hydro energy storage capacities to the future grid given the impending coal exit – but not for a few years.

Figure 3 illustrates that significant changes to NEM operations will unfold through the next two decades. Future NEM generation will be led by variable renewables, supported by storage, gas and existing thermal generation.

According to BloombergNEF’s New Energy Outlook 2019, the share of renewable generation in Australia’s grid will reach 57 per cent by 2030 and 84 per cent by 2050. 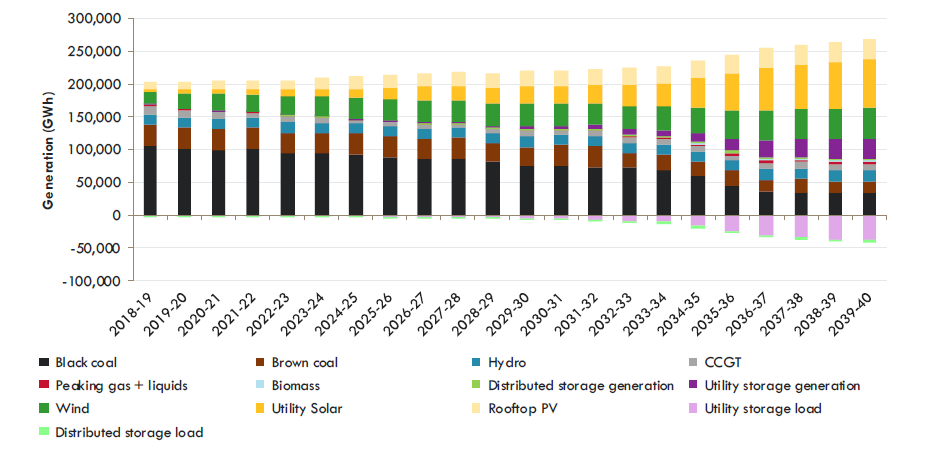 Flexible thermal capacity such as gas-powered generation will also play a critical role in the future generation mix. This will be especially important to help meet growing summer peak demand in the late afternoon and early evenings as generation from solar PV falls as the sun sets and people get home from work and switch on air-conditioners.

This new generation mix requires careful management, innovation and forecasting to ensure system security and reliability is maintained for customers. In doing so, this energy transition is shaping the grid of the future.

Over the next few years, the market will have to rely on price signals and perceived risks to determine the optimum mix of existing generation assets, building new low-cost renewable generation, firming it up with flexible technologies and strategically investing in transmission to increase reliability and lower wholesale prices.

Germany achieved an extraordinary milestone in June 2019, with solar becoming the largest single contributor (19.2 per cent) to the country’s electricity supply for the first time (as shown in Figure 4 [5]). Germany plans to close all 84 of its coal-fired power plants in next 19 years. 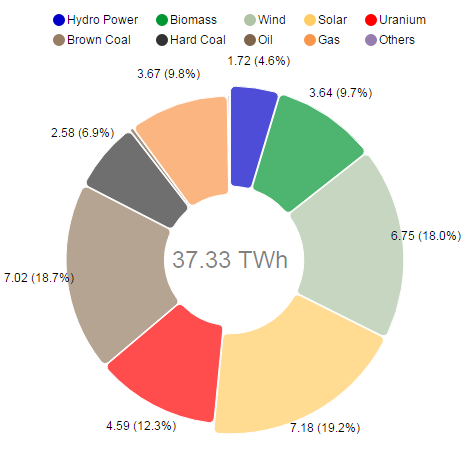 Coal plant retirements also continued at record pace globally, making 2018 the third highest year for retirements and the second highest for the US.

Solar photovoltaics continued to dominate as the frontrunner for global installed renewable power capacity. 100 GW of capacity was added globally, accounting for 55 per cent of new renewable capacity, followed by wind power (28 per cent) and hydropower (11 per cent) as shown in Figure 5. For the fourth year in a row, the addition of renewable power generation capacity outpaced net installations of fossil fuel and nuclear power capacity combined.

The most popular catch phrase in Game of Thrones was “Winter is coming” but in the Australian energy world, it is “Summer is coming”.

It’s no spoiler alert that with summer approaching and a few coal powered stations down, there will be a struggle to pull through the hottest days without power disruption supply.

With our unprecedented level of solar PV in Australia, we face a unique energy scenario. There is no perfect solution to fill the supply gap left by coal but with the right renewable and flexible generation combination, the future supply will be fit for purpose.

So, brace yourselves, summer is coming! 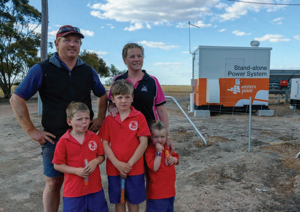