At our ‘Navigating Change – Regulation and tomorrow’s grid’ Seminar in Brisbane, participants were asked:

What do you think is the biggest regulatory challenge facing the energy market?

The results showed that 39 per cent of respondents thought the integration of renewables and distributed energy resources was their top concern.

This was followed by 24 per cent who felt regulation was failing to keep pace.

There was a dead heat for third, with 15 per cent concerned about policy uncertainty and untoward government investment, with adequate returns coming in at 7 per cent

With all that in mind, let’s look at how these topics affect our energy system.

Our energy system is rapidly evolving.

The way consumers use and interact with electricity is changing too.

The AEMC, for example, is attempting to create a sandbox environment where network businesses, the regulator and other interested parties can come together to focus on delivering innovation which is in the best interests of customers.

Customer interests are also front and centre in the New Reg trial underway by AusNet Services with the AER. This will trial new processes to place customers at the heart of developing expenditure plans.

What’s clear is that the way forward involves networks, regulators and customers working closely together.

Regulation is about balance and stability.

The return on investment must be enough to encourage the substantial and generally long-term investments required for infrastructure of this scale. There must also be stability in energy policy and the regulatory regime to provide consistent investment signals.

Historically, our energy systems were built to follow a one-way energy pattern – each year additional consumer connections and a growing demand for energy were satisfied by building more ‘poles and wires’ and increasing generation from capital intensive fixed generation sources.

Now, generation is supplied by many renewable sources (some as small as a rooftop) scattered throughout the country. This renewable energy is becoming increasingly variable, diverse and complex.

Take, for example, the chart in Figure 1 for Southeast Queensland households presented by Professor Paul Simshauser AM at the 2019 Regulation Seminar. 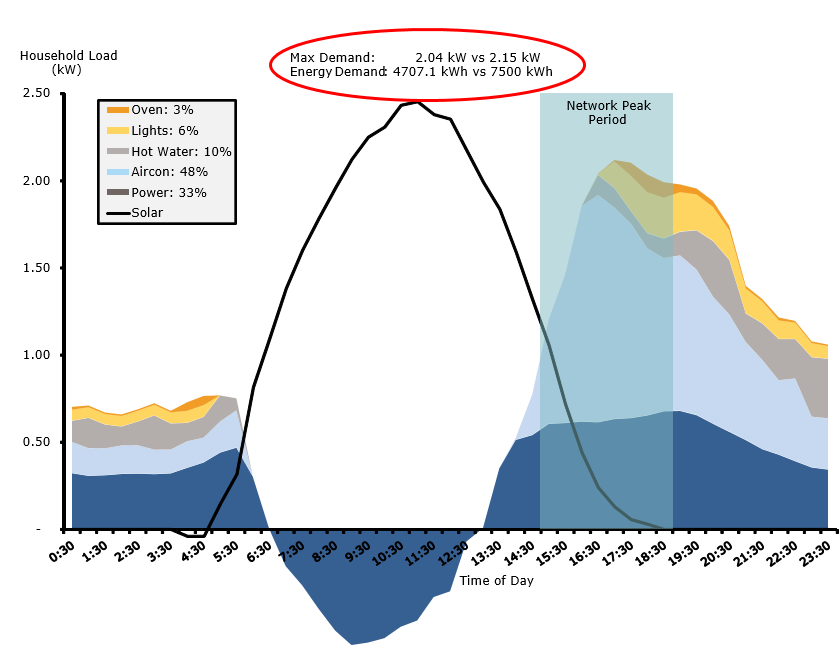 It clearly indicates the scale of reverse power flows that must be managed by networks arising from solar PV during the middle of a hot day, but also highlights that these solar PV investments do little to alleviate the traditional network peak period load in the evening. Networks are now having to invest for both ends of the demand spectrum.

In addition, Australia still lacks a coherent energy policy, and when coupled with a raft of recent and on-going regulatory reviews[i], this has undermined investor confidence. For example, the lower regulated equity returns and low bond rates arising under the revised Rate of Return Guideline are producing some counterintuitive effects – including an allowed return on equity falling below the allowed returns on debt in the AER’s recent final determination for New South Wales electricity distributor Ausgrid. That is, the current approach effectively assumes shareholders, with only an uncertain residual claim to any profits, require lower ongoing returns than debt providers, who possess all the certainty of legally enforceable and secured debt contracts.[ii]

Investors are wary of being able to obtain consistent returns from investments in Australian energy infrastructure assets. This is reflected in recent reports from both:

What we’re seeing is risks increasing and returns decreasing. This adds up to the balance shifting away from what was once a good investment.

This presents a challenge for networks to continue to deliver what customers need and deserve.

With growing amounts of distributed energy resources (DER) in households, we are increasingly feeding power back into the grid through many small sources – a “two-way” flow of electricity.

As this DER penetration increases, parts of the grid in different networks reach a threshold of “reverse flow”, which can cause issues with reliability and quality of power. Predicting where problems might occur and planning for solutions is the focus of Energy Networks Australia and AEMOs Open Energy Networks project.

If not managed properly, this creates risk for networks of potential damage to network infrastructure and the need for costly future upgrades and will reduce service reliability for customers.

By getting this integration of DER right, we can potentially deliver $1 billion in energy benefits to customers. More information on what is being done can be found here.

Hydrogen has great potential to help in this regard, acting as a store of excess renewable energy.

With the rapid increase in renewables, its increasingly looking like the challenge will be not generating enough clean energy but storing it.

Several countries around the world, including Australia, are looking to hydrogen. You can read more about that here.

In a presentation to the Regulation Seminar, AMP Capital’s Stasha Prnjatovic outlined the current challenges in the regulatory environment with policy uncertainty and low equity returns due to:

In a post federal election world, there is great opportunity to set and articulate a clear way forward in the energy space.

It’s unrealistic to expect a government will do nothing.

They are there to make decisions, listen to voters’ concerns, deliver on mandates and fix things that are broken.

What is important is that these changes are made with a long-term focus and in consultation with relevant stakeholders. If not, such changes may do more harm than good.

For example, we need to be wary of cross-subsidies. State and territory government solar schemes could well be viewed in this manner – most provided a subsidised solar photo-voltaic (PV) system for those that could afford to buy them, they then paid the owner a handsome price for producing energy across the middle of the day when it was least required, and the burden of the associated payments fell to those consumers who could not afford to ‘buy-in’ to such a scheme. If the Governments’ aim was to boost the solar PV market without burdening low-income customers, the scheme should never have been designed in such a manner.

The moral of the story is: avoid untoward intervention and focus on long-term outcomes.

All these issues were canvassed during Energy Networks Australia’s regulation seminar.

What stood out over all the interesting insights was one thing: the customer.

At the end of the day, all the complex regulation, discussions happen to ensure that networks can continue to supply customers with affordable and reliable electricity as we transition to a low emissions generation fleet.

Events like the regulation seminar happen to discuss innovative ways we can continue to navigate a rapidly changing environment and create tomorrow’s grid.

[i] For example, the recently completed reviews of the Rate of Return Guideline, Regulatory Taxation Approach and the Approach for Forecasting Operating Expenditure Productivity Growth for electricity distribution networks as well as the on-going reviews of the Value of Customer Reliability and ICT Expenditure Assessment.