Infrastructure Partnerships Australia (IPA) recently released its annual infrastructure investment report, the culmination of an extensive survey of institutional investors on attitudes to investment across the sector. This comes at a time when investment in energy infrastructure is integral to delivering the cost effective and reliable energy needed to allow the political storm surrounding energy prices to abate.

Any investment in the energy system must deliver maximum benefit to customers and the need for stable political and regulatory settings to support this has never greater.

Australia’s energy sector is undergoing massive transformation and disruption. The huge uptake of household solar and storage is putting unprecedented pressure on a 20th century grid that wasn’t built for it. Investment is needed to support the modernisation that is required to enable customer choice.

Investment is also needed in new generation (regardless of technology) as ageing coal-fired plants are retired. A 10-year plus vacuum in energy policy has meant this has been slow to eventuate.

Investment supports grid resilience, customer choice for new technologies and competition in generation. All of which are needed to bring down prices.

A priority for network businesses is to ensure we achieve balance – we don’t want to risk over investment that consumers will pay for through higher energy prices, but doing nothing is not the cheapest option. The aim is to keep costs as low as possible while ensuring new infrastructure can be integrated into the national energy market as efficiently as possible.

It is a great irony that the political and regulatory interventions being pulled out of multiple hats in an effort to ‘bring prices down’ are likely to have the opposite effect by putting a brake on investment.

The IPA report finds that while Australia remains globally attractive for infrastructure investment, investor appetite for energy assets took a hit. An overwhelming 87 per cent of participants agreed there is widespread uncertainty in Australia’s energy sector. 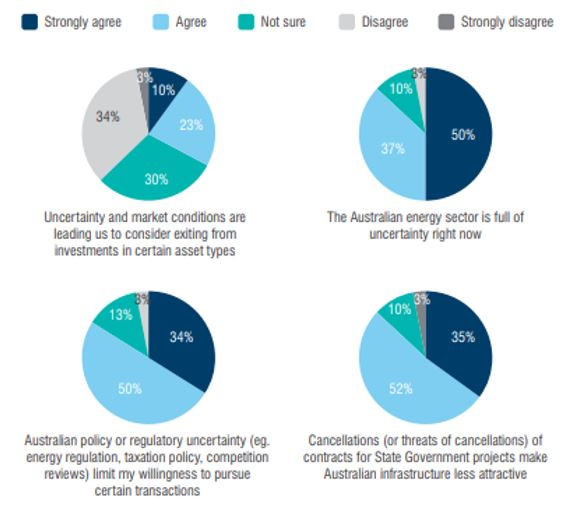 On the increased interest in unregulated assets, one global investor commented,

“The reality is that regulated assets are now more subject to critical nuance, interference and influence, and there are risks embedded in that, which the financial investor can do very little about once the tide of opinion turns against them.” [1]

It would seem, unsurprisingly, that even the capacity to earn a defined rate of return on investment is no longer attractive to investors when regulation is seen to be subject to political interference, with local investors saying,

“There are big concerns about the policy changes over the last couple of years. Things like the removal of Limited Merits Review, the rate of return review, and talk of writing off regulated asset bases, elements which are sacrosanct to the fundamentals of investing in these sectors, are currently coming under question. It makes people really pause for thought, not just about that sector but the broader theme of investing in Australia.”

“Different political parties are playing off against each other so it’s a disaster. The fundamental issue is that governments are just reacting and changing policy and regulation to get an outcome rather than making the harder more material decision which would actually fix the problems.”[2]

These comments line up with investors’ overall perceptions of Australia compared with other markets. While we like to consider we are stable and well-functioning democracy, when it comes to political stability, 14 per cent of investors say Australia is one of the worst markets, another 36 per cent score us below average and 0 per cent think Australia is a clear leader. [3]

We know that poorly considered government interventions and heavy-handed regulation ends up badly for customers and the concern is that Australia’s energy investment settings have shifted into risky territory. Political and regulatory uncertainty – including the demise of the National Energy Guarantee – have clearly limited investors’ willingness to back Australian energy infrastructure.

Which brings us to a key regulatory setting to be determined next month with the finalisation of the Rate of Return Guideline by the Australian Energy Regulator – the single most far-reaching decision in consumer and investment terms until 2022.

The draft guideline has proposed the largest single reduction in investment signals for owners of networks ever delivered, with an allowed risk equity premium (a crucial component to calculating the rate of return) that makes Australia significantly less attractive than our international peers.

It is an interesting fact that of 17 rate of return decisions made by regulatory agencies in Europe, only three – Austria, Romania and Lithuania – have lower equity risk premiums than what is proposed for Australia, The chart below shows the AER is proposing to move Australian returns from upper-middle in the pack to right near the bottom. 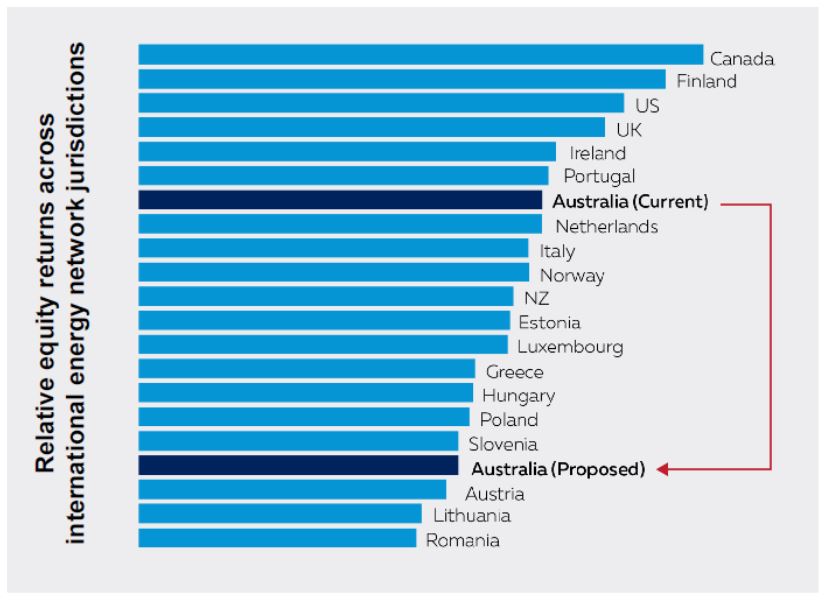 Putting the detailed financial metrics aside, such a reduction in equity returns appears contrary to the heightened risks in the Australian energy sector. In October this year, our Prime Minister, Scott Morrison, announced electricity suppliers must reduce their prices by the end of the year, threatening retailers with a ‘big stick’ if they failed to comply.

The Government has also proposed a range of other market interventions, including threatening retailers and generators with forced divestment, re-regulation of retail pricing, market caps on generation ownership and underwriting of new ‘firm’ generation. In the network space, it kicked off a review of the way network taxation allowances are calculated with a “shoot first and ask questions later” approach.

All these interventions have clearly been politically motivated, justified as necessary to bring down prices in the frame of a looming federal election. And while that objective is one that all customers (and we are all energy customers) can applaud, the unintended consequence of such moves could be very significant indeed.

The IPA report sounds a cautionary note about political uncertainty and regulatory interventions that decision makers should heed in the long-term interests of customers and all our energy bills. Unfortunately long-term interests don’t tend to align with three-year federal electoral cycles.

Is it true smart meters cause headaches?

Heads Up! Is more notice about Generation closures needed?