deX education: how will the new energy marketplace work?

Around the world, the race is on for the technology platforms and systems that will support utilities to overcome complex challenges in orchestrating large volumes of small scale generation. UK Distribution Network Operators are working with Ofgem as they navigate the transition to Distribution System Operators, with active system operating functions enabling the ‘security constrained dispatch’ of distributed resources.

The new AEMO report provided to the Federal Government this week reinforces the need for platforms and markets to enable the use of distributed energy resources as our generation mix changes.

One such platform for the Australian market is Greensync’s “deX”.

So what exactly is deX? And how will it work to help keep the lights on as growing numbers of distributed energy resources (DER) connect to the grid?

Why do we need deX?

Energy flows are increasingly multilateral and distributed. Energy generation is transitioning from centralised large scale generation plant to more distributed energy markets. The recent Finkel Blueprint for the future security of the NEM recognised that the electrical system was not originally designed to accommodate the millions of distributed energy resources already connected today, and likely to be integrated in the future. While these distributed energy resources have the potential to provide significant benefits for the market, the Finkel Blueprint recognised that these benefits will not accrue without adequate planning:

Growing numbers of DER greatly increases the complexity of operating the power system, requiring management of large amounts of data, advanced operating and communication systems and development of software for stable and efficient operation; and can undermine the effectiveness of existing mechanisms for maintaining security.

Utilities are looking at platforms and market arrangements to increase visibility of DER on their system and to help manage technical difficulties created by new connections and to support system stability. Speaking at the launch of deX last week, GreenSync CEO Phil Blythe said:

“The ownership structures of the grid are actually changing. The only way we can franchise millions of participants is with markets… [these markets] could be as small as a suburban street where a market could exist for the use and exchange of energy in that street or it could be a state wide kind of market or across the entire grid.”

Greentech media described technologies to enable these platforms and markets as “a goosed-up distribution management system, a bit like a transmission grid operator’s suite of operations and market management software, and it brings together a whole lot of new technologies now just being put to the test in real-world applications.”

Hawaiian Electric’s grid modernisation strategy released last month has at its core developments of a platform which enables customers to adopt DER and the potential to monetise additional value through selling services back to the utility:

“The proposed platform will integrate non-replaceable physical infrastructure (“poles and wires”) with advanced communications, sensing and measurement, distribution automation, protection, and controls to create a core platform. Applications such as customer advanced metering will leverage this set of core platform technologies.”

An AEMO report requested by Energy Minister Josh Frydenberg and released this week recognises the role that demand resources behind the meter could play in keeping the lights on as the NEM loses more coal-fired generation and gains more variable renewable generation:

“The key finding of this report is that there is a need to retain and incentivise resources that can be dispatched as required to reduce power system risks. These resources could consist of generation on the grid, storage, demand resources behind the meter, flexible demand, or flexible network capability.”

Speaking at the launch of deX, AEMO CEO Audrey Zibelman said “having entities like GreenSync… bring that ecosystem together and present us with a larger solution is going to allow organisations like AEMO to use distributed resources better.”

deX is a digitised energy trading platform that essentially establishes a market place for DER.

“deX enables physical contracts… it means we’re actually controlling things and switching things on and off that make a physical difference to our grid. We’re releasing energy from batteries, we’re restricting the amount of generation from rooftop solar, switching on and off air conditioning systems…for financial reward.”

This “orchestration” of energy assets to be used in the right place, at the right time, could save customers a total of $16 billion in network costs by 2050, as demonstrated by the Electricity Network Transformation Roadmap. Platforms like deX will provide networks with the visibility required to do this, and the ability to pay customers for the use of their DER.

The exciting feature of deX is that it practically addresses today some of the key capability requirements which were identified in the Electricity Network Transformation Roadmap as being essential to actively managed distribution system operations in future. For instance:

It’s not just limited to transactions between energy networks and homes and businesses. A number of participants can contract the use of a distributed resource according to the constraints and rules established by the deX including energy retailers, aggregators and new energy companies, and potentially technology vendors that help facilitate these transactions. 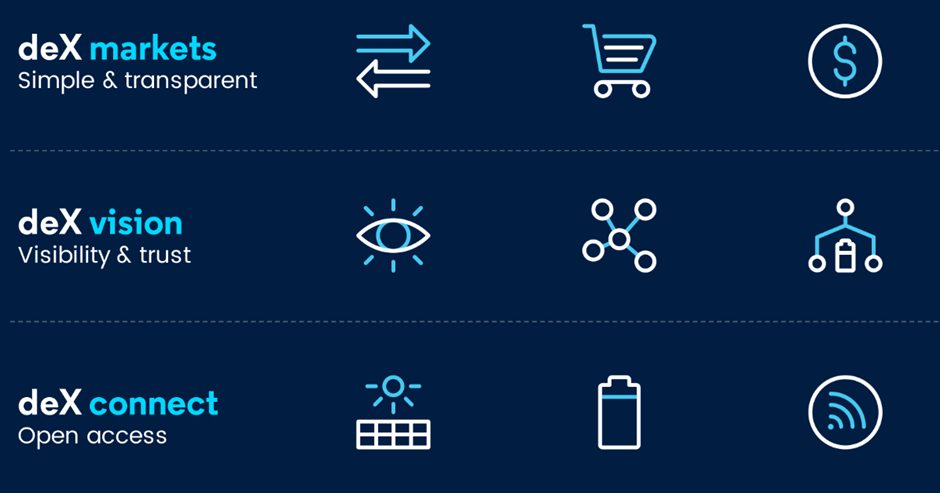 While deX “lists buyers and sellers, records agreements between them, manages event handling and verifies both parties met their obligations”, GreenSync says it differs from blockchain.

“Blockchain is a ledger and deX is a marketplace. deX is an open access platform that allows a range of transaction services, such as blockchain and peer to peer to be hosted. Block chain and deX can work hand in hand… Blockchain is a mechanism for recording transactions.”

Where is deX being used?

GreenSync has mapped out a series of milestones for deX in the coming months including the official launch of the Mornington Peninsula Community Grid Project in November. deX visibility is expected to be released to the market in April 2018. This will provide “visibility of DER locations along with capability and capacity that are registered on deX”.

Last month Greentech media explored how NYREV is being shaped by energy storage, microgrids and customer engagement noting the pilots and trials that are driving utilities to adapt their businesses. As part their vision of a grid that’s fully capable of managing DERs at mass scale and compensating them for their grid value, REV is asking each utility to work toward becoming a distributed system platform provider.

An example of this was National Grid’s first field demonstration of a distributed system platform (DSP), integrating distributed energy resources from the Buffalo Niagara Medical Campus (BNMC) with the local electricity distribution system. National Grid’s vision sees such a platform expanded to create markets, tariffs and operational systems that will allow resource providers to monetize products and services, while the utility becomes the purchaser and aggregator of DERs.

However technology platforms are complex and not without their challenges. Greentech media reported that development has been subject to a series of delays as some of the complexities of the platform are refined, including the financial modelling methodology for hourly price signals to DER owners.

What next for deX?

The experience in New York and Hawaii demonstrates the difficulties that can be encountered when trialling highly technical solutions to complex issues. Start-ups like GreenSync are embracing the challenge and garnering industry-wide support for initiatives such as deX.

“We are here in Australia. We are an Australian tech company. This is Australian challenges we are experiencing now… but we are part of something that has a global significance,” GreenSync CEO Phil Blythe said at the initiative’s official launch.

“Australia, by doing what we are doing… is going to be solving these issues that are going to be taken to Houston, to New York to Japan and everywhere else where people are struggling with the same set of requirements.”

Old Blighty the innovator: grids of the future