Australians may be taking up rooftop solar panels at world-leading rates of penetration and responding to the consumer appeal of battery storage – but our electric vehicles are still ‘idle’.

Electric vehicle sales in Australia in 2014 totalled 948, representing less than 0.09% of the Australian market.[1]

How fast could we put the pedal to the metal? Last week a report by Beyond Zero Emissions (BZE) suggested[2] the transition of the Australian car fleet to 100 per cent electric vehicles within ten years was feasible. The study compared a business as usual scenario to an assumption that Internal Combustion Engine (ICE) cars were phased out from 2015, along with assumptions on the size and composition of the car fleet and rates of installation of charging infrastructure.

The report identified costs would be approximately 25 per cent higher, assuming a shift to 100 per cent electric cars, operating on 100 per cent renewable electricity, and while abating 50 million tonnes per annum in emissions by 2025. It identifies an alternative scenario (with low EV costs and high petrol prices) and finds it could “cost no more than business as usual.” 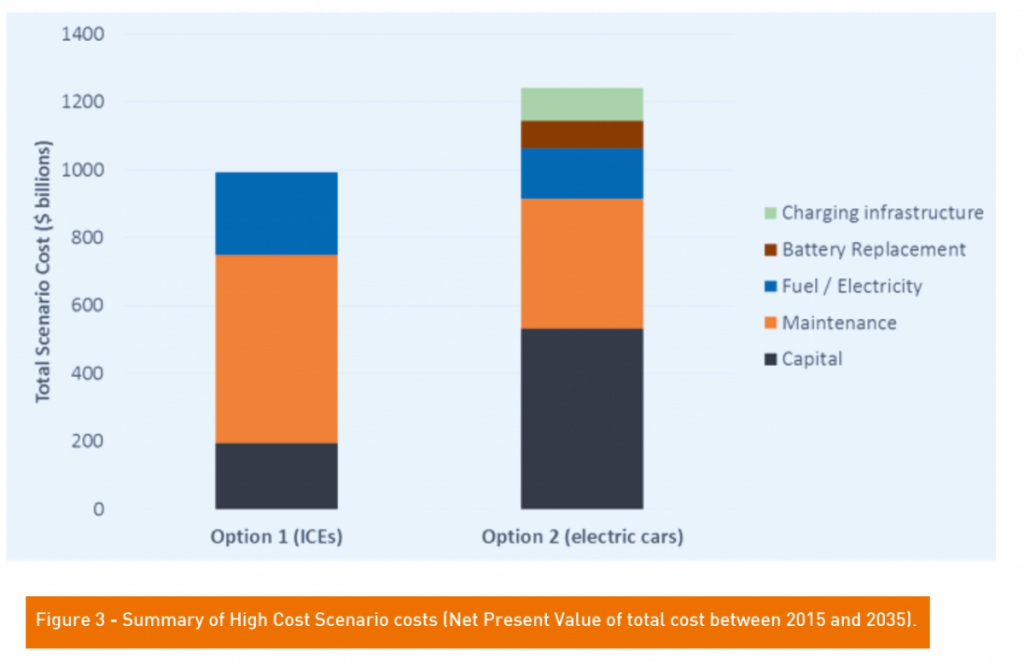 The BZE report timeframes are unapologetically more ambitious than our current outlook in Australia. The diverse projections of EVs as a proportion of the vehicle fleet were summarised in the Electricity Network Transformation Roadmap’s Future Grid Forum – 2015 Refresh as per the figure below.[3] 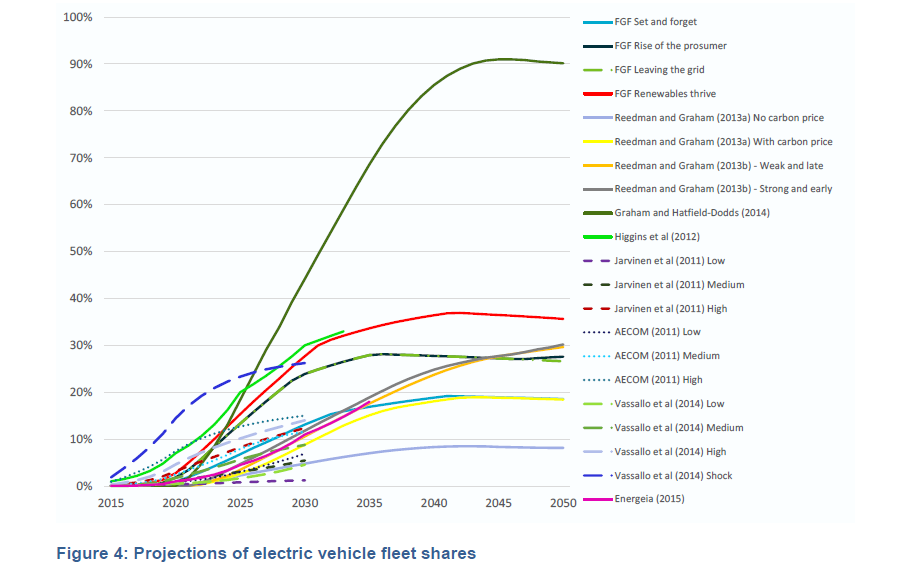 What can Australia do to support EV adoption?

Importantly, this initiative is part of broader technology neutral measures. Section 1413 of the FAST Act requires that the Secretary of Transportation designates national EV charging, hydrogen, propane, and natural gas fuelling corridors, and the nomination process ensures that the corridors proposed for designation create a national network of alternative fuel facilities.

The new announcement included a set of Guiding Principles to Promote Electric Vehicles and Charging Infrastructure and the nearly 50 organisations that signed onto it will use it to work together to accelerate electric vehicle deployment.

In Australia,  as reported in EnergyInsider in April, a coalition led by ClimateWorks that includes TransGrid, Ergon Energy and AGL Energy was established to build coordination across Australia’s emerging electric vehicle market. The coalition works across the automotive, technology, climate and energy industries to build an evidence base of key barriers, and solutions to overcome these, to support significant uptake of electric vehicles.

Representatives of the coalition have since briefed key Federal and State Ministers and departmental staff on a nationally co-ordinated approach to the introduction of infrastructure, incentives and regulation to ensure the growing consumer uptake of electric vehicles helps meet Australia’s climate, energy productivity and air quality goals.

Further, Ergon Energy has mapped its network for electric vehicle charging stations from Toowoomba to Cairns to bring the electric car super highway another step closer. While the mapping exercise focussed on identifying surplus network capacity, it also considered the driving range of fast charge capable vehicles, like Tesla.

Ergon Energy is also providing consumer information on choosing an electric vehicle and charging options and links to a tool for calculating fuel savings.

Tesla Motors is rolling out its electric car ‘supercharger’ charging stations through connection to the Essential Energy grid and other networks. Stations have been established in the Goulburn, Gundagai and Port Macquarie areas. 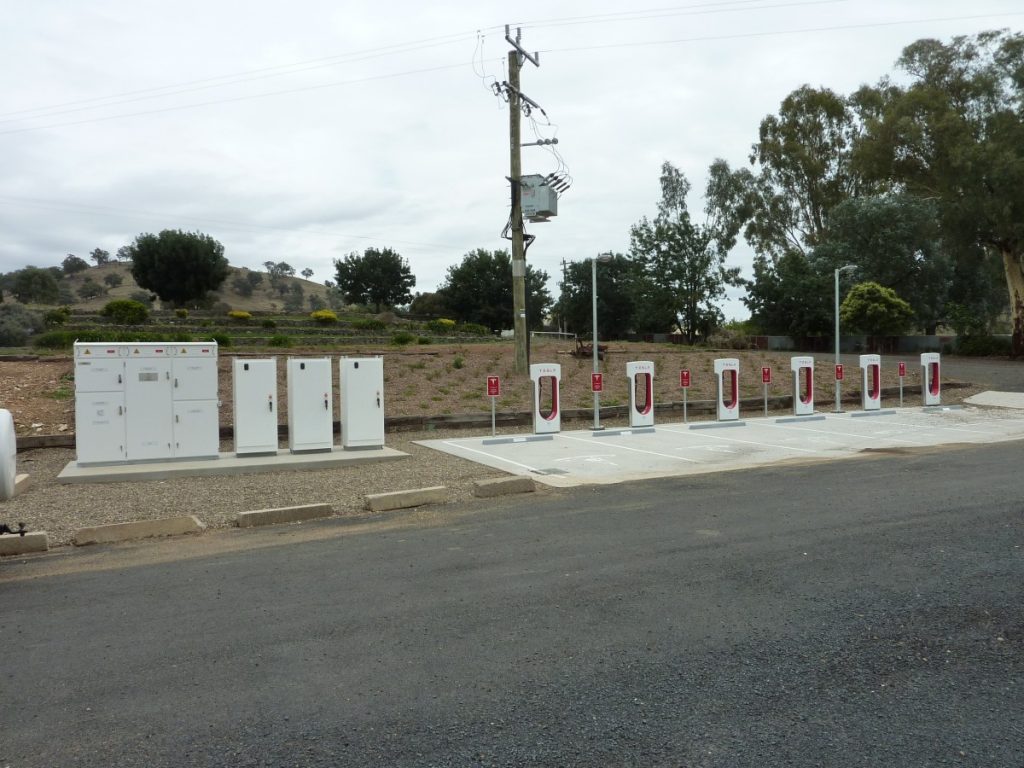 Tasmania’s energy distributor, TasNetworks, recently entered into a partnership with Community Transport Services Tasmania to introduce an electric vehicle into its fleet of community transport vehicles, providing TasNetworks with the opportunity to gather data on usage and charging patterns, which will inform future network design considerations. The partnership will also assess the user experience to better understand how electric vehicles can be utilised as part of a fleet.

What do EV’s mean for the Grid?

Previous work by the CSIRO has indicated that electric vehicles have the potential to provide substantial benefits to network peak demand management (through Vehicle 2 Grid charging) or substantial risks if pricing and incentives are insufficient. 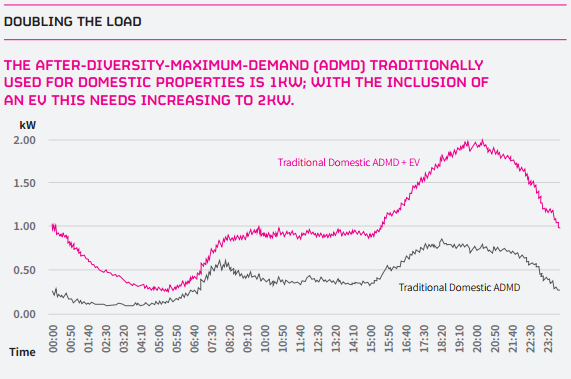 However, the BZE report rightly highlights[5] that electric vehicles, as with other distributed energy resources, have the potential to improve efficiency of the electricity grid and act as a stabilising service for an electricity system powered by intermittent renewable energy.

This notion is reflected in the Rocky Mountain Institute’s Electric Vehicles as Distributed Energy Resources report. RMI says[6] that, considered as a pooled resource, electric vehicles could provide a wide range of valuable grid services, from demand response and voltage regulation to distribution-level services to optimise existing grid assets and avoid new investment in grid infrastructure. It says:

To tap these opportunities, utilities and regulators will need to understand the big forces now driving change in the EV sector and engage with industry partners to influence the paths of technical and market development.[7]

RMI says[8] that regulators in a growing number of key US jurisdictions, including New York, California, and a number of other states, are looking to strengthen incentives for utilities to use distributed energy resources to reduce or avoid grid costs.

The second stage of the Electricity Network Transformation Roadmap project by the Energy Networks Association and CSIRO is further developing understanding of efficient energy network utilisation. It will include options to enhance the efficient electrification of transport, and the value to the electricity system of increasing levels of electric vehicle adoption. Key findings will be available later in 2016.