ESOO – How tight is tight for this summer?

The Australian Energy Market Operator (AEMO) has forecast the reliability outlook for the next decade based on existing and committed generation capacity. The 2019 Electricity Statement of Opportunities (ESOO) shows that in one state it is forecast that there will be unserved energy.

This analysis takes into account only committed generation or transmission projects and takes no account of the planned interconnector upgrades between Victoria and NSW (VNI) and Queensland and NSW (QNI).

The South Australia-NSW-Victoria interconnector project (EnergyConnect) is not included in this forecast. The Australia Energy Regulator (AER) is reviewing the project to assess the preferred option satisfies the regulatory investment test. Until the AER has completed this review, the transmission infrastructure project is not considered committed.

In addition, the raft of forthcoming generation projects in Fig 2 are also not included as they are not considered committed projects yet. Assuming these generation projects are commissioned and there is sufficient transmission capacity to get the generation to the load centres, they will help reduce the unserved energy levels.

How does transmission help?

In this year’s longer-term ESOO outlook, AEMO has assumed that both the minor upgrades for VNI and QNI will be fully operational by September 2022 ahead of Liddell closure. A number of minor transmission augmentations were already included in the modelling in the transmission constraint equations, such as the installation of synchronous condensers in South Australia by January 2021. The ESOO reconfirms the importance of targeted transmission augmentations. The ability to fast track delivery of least regrets transmission infrastructure could deliver important reliability and resilience benefits.

The two interconnector upgrades – VNI and QNI – improve the unserved energy in all three regions as depicted in Fig 3. Transmission network service providers, governments and the AER is seeking to implement these in a timely manner prior to Liddell’s closure. 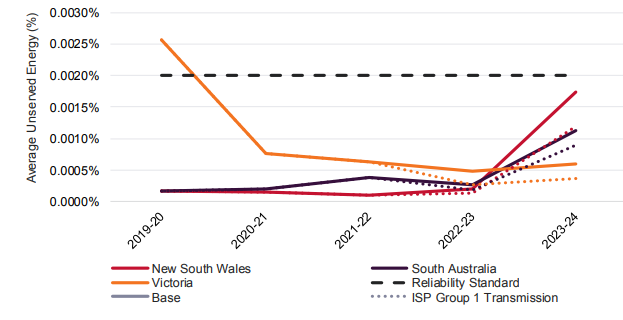 In its longer-term outlook, AEMO has included committed large scale generation projects such as Snowy 2.0 being fully operational by March 2025. However, the underlying transmission projects to get the increased generation to the load centres – Sydney and Melbourne – will only be considered in the next ISP released mid-2020.

Efficient transmission upgrades are a key part of the least regrets integrated system plan to get the additional generation capacity to load centres. Without transmission, there is no highway for the delivery. Governments need to work together to ensure that projects like Snowy 2.0 and Battery of the Nation are able to provide dispatchable energy on demand to the major load centres in the NEM. Investment signals need to be right for the strategic transmission investment required to ensure these major greenfields projects proceed.

So what is happening in Victoria?

There are two major generator units currently unavailable in Victoria – Mortlake Unit 2 (259MW) and Loy Yang A Unit 2 (500MW) which provide over 750MW of capacity. Both generators are actively seeking to complete their equipment repair works to bring the units back online in mid-December 2019.

The AEMO modelling for the 0.026 per cent unserved energy in Victoria is based on operational experience and the potential for a delay in the return to service. Following the prolonged outages, the modelling has assumed a 30 per cent probability that Loy Yang A Unit 2 remains out of service until 1 March 2020 and a 60 per cent probability that Mortlake remains out of service until 1 March 2020 also.

Early this week the merchant Basslink, the only cable joining Tasmania to the NEM, announced that it has a cable failure and would not be back online until mid-October. The ESOO modelling counted on this cable being available for summer, so supply and demand is looking pretty tight.

Not meeting the reliability standard does not mean there will be blackouts, but it does mean there’s a greater chance of them occurring. AEMO is already actively seeking the maximum permissible energy using the Reliability and Emergency Reserve Trader (RERT) mechanism to ensure Victoria meets its reliability standard this summer. This is the first time that RERT capability has been actively sought for all jurisdictions in the NEM.

Over the longer term, investment in new transmission is needed to alleviate the situation and some energy and climate policy stability would help!