To most of us, the first moon landing in 1969 was a long time ago. Indeed, it was 50 years ago this weekend. However, the moon landing didn’t happen overnight. It started in the early 1960’s with President Kennedy proposing that the United States:

“should commit itself to achieving the goal, before this decade is out, of landing a man on the Moon and returning him safely to the Earth.”

This challenge started a decade of innovation and investment involving hundreds of thousands of people. The innovation developed for the Moon mission has led to many things we take for granted in our modern lifestyles. For example, computing and telecommunications would not be as advanced without the program. Even more mundane things such as water filters, scratch resistant lenses and memory foam trace back to the inventions from the Moon program. Many of these technologies have become mainstream.

There is a link between hydrogen and the Moon missions. The Apollo missions used a fuel cell, which combined hydrogen and oxygen to generate electrical power and water for the spacecraft. The water was used by the astronauts for drinking. The Apollo Service Modules carried three such fuel cells[1]. Fifty years on and the global momentum in using fuel cells for mobility is on the edge of becoming a commercial reality[2]. I’m sure many of us have witnessed fuel cell enthusiasts drink water from fuel cell vehicle exhausts. 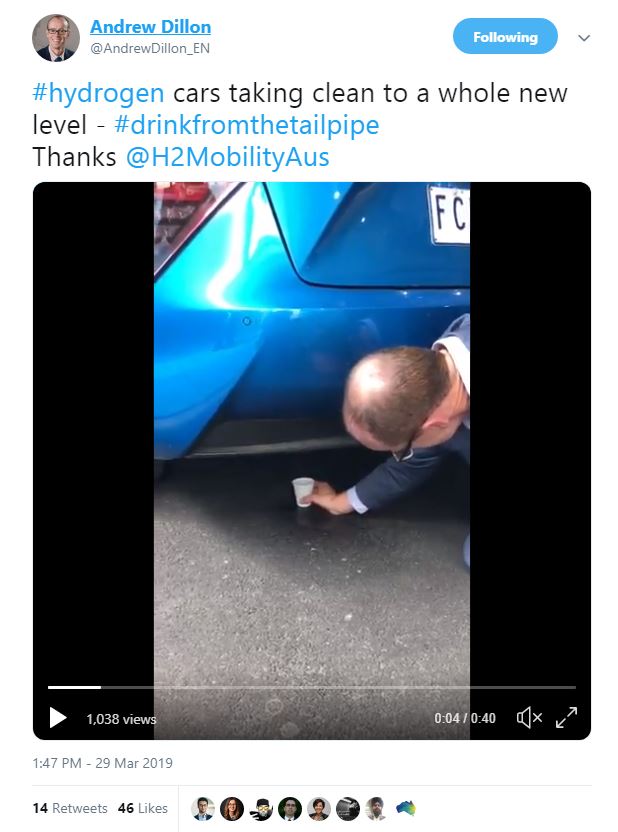 Interestingly, it was around the same time as the Moon landing that natural gas became prominent. Back in the late 1960s the main form of gas used was ‘Towns’ gas, which was produced from coal and comprised about 50 per cent hydrogen, 25 per cent methane and a 25 per cent mix of gases including carbon dioxide and carbon monoxide. Pretty nasty stuff. The discoveries of gas in the late 1960s and early 1970s led to the conversion to natural gas.

While the Moon Mission had a clear presidential edict, the conversion to natural gas seems to have come about due to a range of factors including:

Nevertheless, these conversions were nation building projects with proposals such as the “Energy Highway across Australia” proposed in 1972, supported by appliance conversions programs across the country. Many more pipelines have been built since that time, but the link between east and west coasts has not been made. 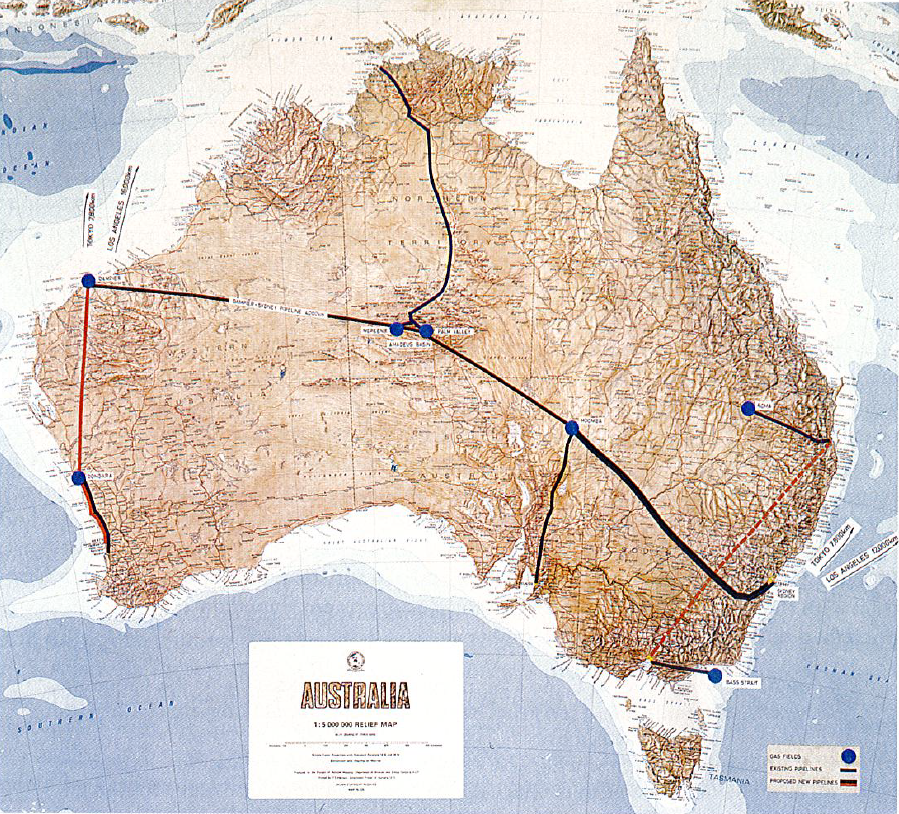 Brisbane, Adelaide and Melbourne were the first cities to be connected to natural gas. The first fields to provide gas to Victoria were the Barracouta and Marlin fields in the offshore Gippsland basin and these are still producing gas today. The fifty years of development in these gas fields has seen huge advances in technology, for example seismic modelling and improved extraction technologies that allow more of the gas to be recovered. Undoubtedly, these technologies benefited from the Moon missions.

Gas production has grown steadily since the late 1960s in Australia. This growth in production led to a growth in domestic consumption of gas. LNG exports started on the west coast in the late 1980s and on the east coast in 2014/15 from coal seam gas developments after a domestic market was well established. 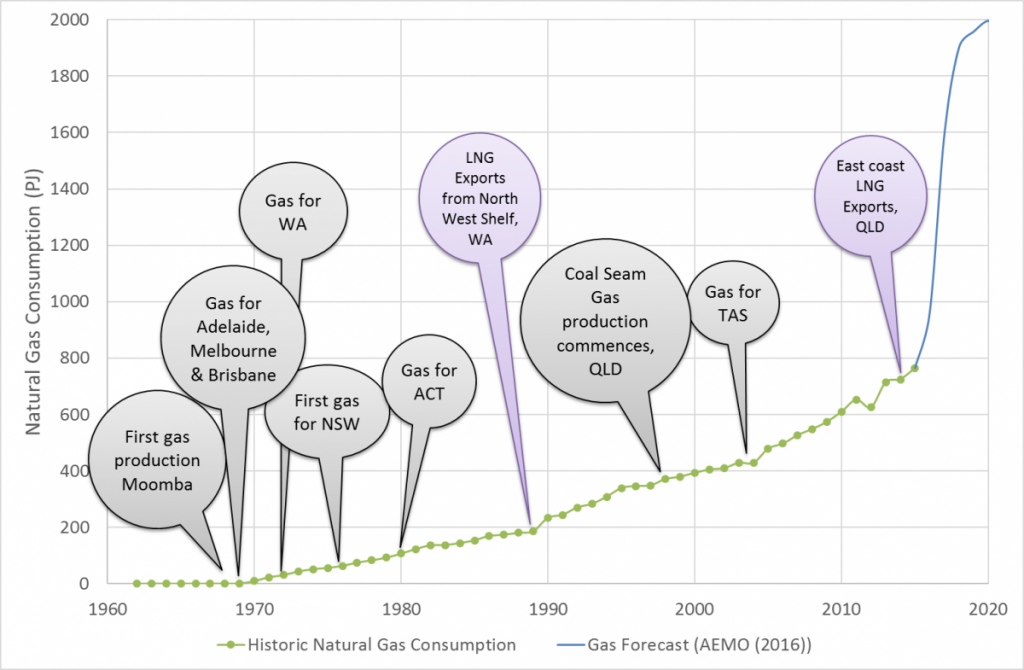 While gas consumption started in the 1970s with conversion to natural gas from Towns gas, connections have continued to grow since then. The conversion of Australian household appliances took the best part of a decade involving almost 250,000 people. This is small compared with the UK, where more than 40 million households were converted in the decade[3].

As of 2018, there were almost five million homes connected to natural gas. This is a four-fold increase from the initial conversion in the 1970s. Seventy five percent of WA homes are gas connected, 80 per cent in Victoria and 85 per cent in the ACT.

Gas has grown strongly in the past 50 years and continues to do so.

The original businesses involved on the conversion from Towns gas to natural gas 50 years ago could not have foreseen such a massive growth in gas consumption in Australia and could not have predicted Australia’s massive gas export opportunities.

So where is gas headed in the next fifty years?

Globally there is a lot of momentum to blend gas supplies with hydrogen and in the longer term to fully convert networks to hydrogen. The Australian Government is developing a National Hydrogen Strategy[4] and released an issues paper in late June. Converting networks to hydrogen will require an appliance conversion process, similar to that carried out 50 years ago. Some advanced plans for this next conversion have already been published[5] and they don’t indicate any major technical hurdles.

What is needed to address these questions is international focus and domestic support. The Japanese have a roadmap with clearly articulated targets for 2025 and 2030. The Koreans also have a roadmap, as do others. Do these roadmaps have a similar effect as President Kennedy’s Moon Mission speech and will they drive hydrogen investment and innovation for the next decade?

Will Australia’s National Hydrogen Strategy provide the right signals to lead the transformation of Australia’s gas networks to hydrogen?

When we look back at our gas infrastructure in 50 years, will we think that the hydrogen vision was all in vain, or will we look back and realise how networks were able to lead the role to decarbonise the economy and remember that these innovative projects led to massive new industries of hydrogen exports and mobility?

The Moon mission and the past 50 year of natural gas indicate that there will be opportunities in the next 50 years that we haven’t even dreamt of.

Will hydrogen be a huge leap for mankind in energy?

[3] The Institution of Engineering and Technology (2019), Transitioning to hydrogen. 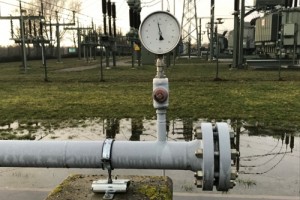