In the zone: Finkel’s hands on approach to planning for renewables

The Finkel Panel’s Blueprint for the Future is nothing if not hands on. As discussed in last week’s Energy Insider, the Panel found Australia’s energy market was subject to comparatively weak coordination compared to other countries, with its laissez-faire National Electricity Market (NEM) relying on energy-only market signals, confused policy signals in federalist governance and cooperative planning between network providers and the market operator.

One of its key recommendations was for greater strategic planning of transmission infrastructure, including a new anticipatory planning mechanism to allow the efficient development and connection of new Renewable Energy Zones (REZ). These zones are gaining international prominence as a transmission planning tool enable the “scale up” of penetration of solar, wind, and other resources on the grid[i]. The key problem that the REZ is trying to solve is the mismatch in timing between the development of renewable generation and transmission planning.

Developing a REZ allows power system planners to overcome the difference in timescales associated with developing transmission and RE generation. A utility-scale wind or solar plant takes 2-3 years or less to construct, while planning, permitting, and constructing new high-voltage transmission can take 10 years or more. [ii]

These timing issues can lead to a “chicken and egg” investment stand-off where access to transmission undermines the commercial certainty of renewable energy projects yet the uncertain outlook for generation utilisation undermines the business case for the Transmission Network Service Provider (TNSP).

Finkel’s Panel notes some jurisdictions like Germany, the United Kingdom and Texas, USA, are making a “strategic policy choice” to facilitate large scale renewable energy generation. Following suit, the Panel proposes an Integrated Grid Plan be developed by the Australian Energy Market Operator (AEMO) and TNSPs. Using resources like the Australian Renewable Energy Mapping Infrastructure (AREMI), the plan should “determine the optimal transmission network design to enable the connection of renewable energy resources, including through inter-regional connections.” The first plan is due to be released by the middle of next year and the Blueprint says it should:

Did it work in Texas?

From 2005, the State of Texas pioneered the use of five Competitive Renewable Energy Zones (CREZ), to cope with overwhelming wind generation in West Texas which was leading to network congestion, wind curtailment and stifled investment. The CREZ program saw the development of 3,600 miles of transmission and access for 18,500 MW of wind generation. While investments were significant at $US6.8 billion, ratepayers are estimated to be saving $US1.7 billion a year in electricity production costs, creating more than $5 billion in economic development benefits and cutting electric-sector carbon emissions by 16 %. The CREZ lines significantly reduce wind curtailment in Texas by more than 90%, from 17.1% of potential wind generation in 2009 (3,782 GWh) to just 1.2% in 2013 (363 GWh)..

Can it work in Australia?

Some Australian TNSPs are already actively promoting REZ concepts within their Transmission Annual Planning Reports. In Queensland, Powerlink has identified that its network currently has much lower penetration of intermittent renewables (to total generation capacity) and “…is capable of accommodating a considerable number of additional renewable connections without immediate concern for overall system stability.” To assist renewable proponents, Powerlink categorised its indicative connection point capacity limits in the existing transmission network in its 2016 Transmission Annual Planning Report, identifying 17 nodes with capacity of up to 50 MW, 23 nodes with capacity of 50 MW to 100 MW; 18 nodes between 150 MW and 400 MW; and 3 nodes with potentially greater than 400 MW of capacity.

Powerlink proposed Renewable Energy Zones judged on criteria including customer benefits, resource potential, infrastructure availability and other factors. The REZ could be progressed as an expansion of the existing network into the zone of interest, as either a high capacity transmission line or a connection hub, to provide cost savings to clusters of renewable energy projects. 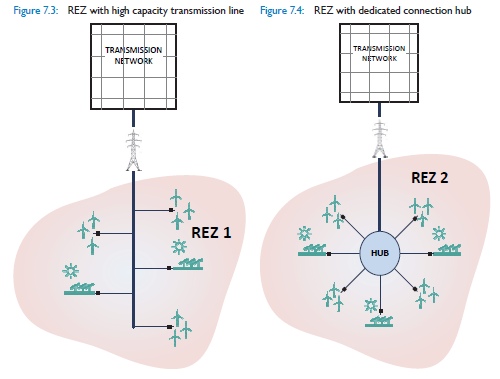 What happens after the Plan?

The Finkel Blueprint anticipates that proposed projects under the Grid Integration Plan will be assessed in accordance with the current Regulated Investment Test (Transmission), recently reviewed by the COAG Energy Council. However, if the regulatory investment tests and market funding sources are not able to deliver beneficial projects required in the Grid Integration Plan, the Finkel Blueprint proposes Governments should be presented with investment options, to be assessed using an economic framework developed by the Australian Energy Market Commission (AEMC).

Some Governments are already acting. The Queensland Government recently committed $150 million to develop strategic transmission infrastructure in North and North-West Queensland to support a clean energy hub, subject to a feasibility study. The Government said the “clean energy hub” would connect a 75 MW wind farm at Forsayth, a 520 MW Kidston Hydro and Solar project and the Kennedy Energy Park combining wind and solar generation with a capacity of 1200 MW near Hughenden. 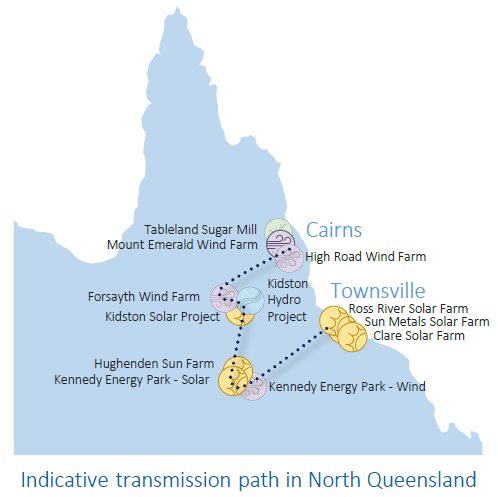 What can go wrong with poor coordination in generation and transmission planning?

As noted above, Renewable Energy Zones are often initiated to unlock further renewable energy development which could otherwise be hindered by uncertainty about transmission planning. However, strategic alignment of transmission and generation planning is also vital to avoid belated infrastructure responses which increase network congestion and curtailment of generation.

In extreme scenarios, the impacts can be major. The International Renewable Energy Agency estimates nearly 2 GW of newly built wind plants in Brazil were standing idle in 2013 due to insufficient grid capacity. Until 2011, local governments in China were authorising wind farms of up to 50 MW without regard to whether there was adequate transmission capacity. [iii]

Based on the volume of new renewable generation resources and the locations for build-out projected in the DPS SEIS, the NYISO estimates that one likely transmission development scenario could require nearly 1,000 miles of new bulk power transmission, in addition to the AC Transmission and Western New York public policy initiatives now underway, to avoid frequent west to east transmission constraints in the future.

The New YorkState Government in turn criticised NYISO as “held captive by [its] stakeholders” and its analysis as “misleading, incomplete and grossly inaccurate”.

In its Victorian Annual Planning Report released last week, AEMO is moving to proactively anticipate the potential network congestion and curtailment challenges which could arise in the rapid development of wind generation in response to the Victorian Renewable Energy Target (VRET).

AEMO highlights that the VRET is driving “the most rapid rate of investment the Victorian power system has experienced to date” with up to 5,400 MW of additional large-scale renewable generation by 2025. It has so far received connection applications and enquiries for over 5,000 MW of new generation capacity in western Victoria, of which 80% is proposing to connect to the 66 kV and 220 kV network.

However, the thermal limitations on the 200 kV system is likely to see up to half of the energy output of new connecting generators on that system being curtailed unless augmentation occurs. AEMO indicates this would equate to over 1,600 gigawatt hours (GWh) per year, with inefficient generation dispatch leading to higher electricity prices for consumers.

AEMO is now looking at a diverse range of options including minor and major network augmentations and non-network solutions, with an expectation that “a small subset of the 220 kV options will be economic”. 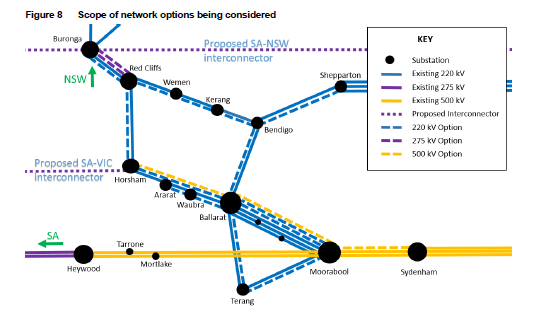 Its analysis indicates the benefits could be material – by removing thermal limitations in western Victoria, the gross market benefit could represent “$300 to $500 million over 30 years based on saved generation re-dispatch costs”. There are also likely to be requirements for network reinforcement to address system strength, which would otherwise limit the non-synchronous generation that could be connected.

Will the Finkel Blueprint recommendations proceed?

This week the Federal Energy Minister Josh Frydenberg announced the Commonwealth would support at least 49 of the 50 recommendations of the Finkel Blueprint report for consideration by COAG Energy Council. Further consideration will be given to one recommendation (related to the Clean Energy Target).

Should the COAG Energy Council also provide support, it appears likely that AEMO, TNSPs and renewable energy proponents will soon be collaborating in the development of an Integrated Grid Plan, to be prepared by mid-2018.

[iii] International Renewable Energy Agency, Getting Wind and Sun onto the Grid, page 32.