Refuelling Your Car with Hydrogen

“With these changes coming to the cost, range and infrastructure for electric vehicles in Australia, it is estimated that by 2025 there will be 230,000 such cars on our roads and more than one million by 2030. This will not only produce a good economic dividend for consumers, but also a better environmental outcome.”

While the future is bright for cleaner transport – in our enthusiasm there’s a cautionary tale of picking winners. Advocating a single technology may not lead to the best outcomes for consumers. The Ministerial Forum on Vehicle Emissions is now considering fuel standards, emission standards and efficiency of vehicles, which may also drive incentives for low emissions vehicle take-up. However, in reducing emissions from transport we must explore new technologies and fuels, in addition to examining how a technology neutral policy considers lifecycle emissions.

While the focus of carbon policy has been on the electricity generation sector, there are also opportunities for decarbonising transport in Australia. The road transport sector accounted for 79 million tonnes of CO2-e in 2015, or 85% of total transport emissions. Light vehicles accounted for 72% of road transport emissions. The figure below demonstrates the challenge for the energy sector. The top green line illustrates the amount of energy used directly in Victoria. The focus of Australia’s energy policy has been on the red line for electricity or on emissions reduction through replacing conventional generation with renewable sources. The energy consumed in transport is roughly double that again of electricity and the consumption of gas is roughly the same as electricity averaged over the year. 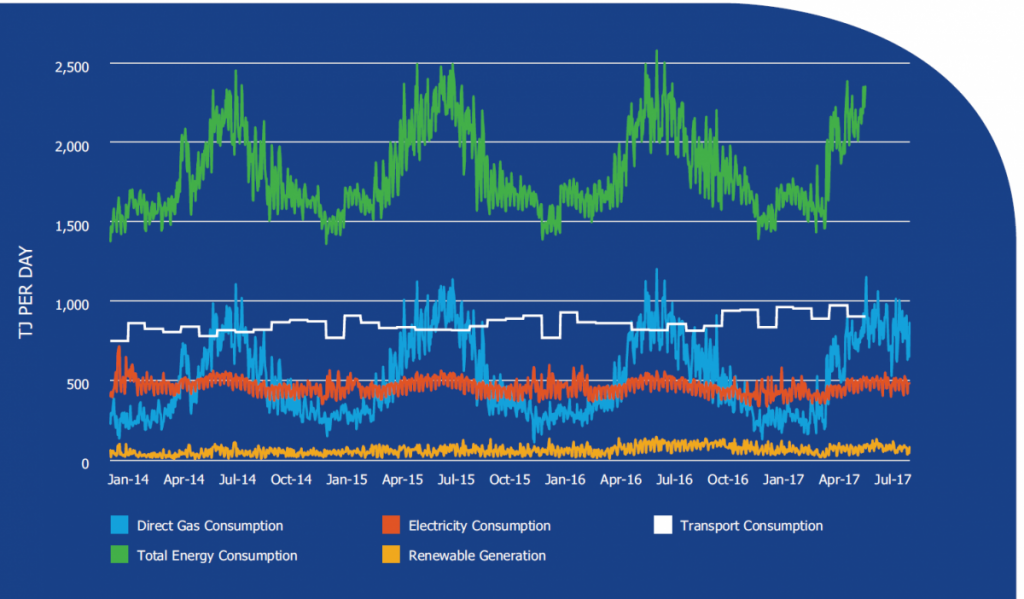 The amount of transport energy does not need to be replaced on a one for one basis as conversion of fuel is typically only 30% efficient while conversion of electricity for battery electric vehicles is closer to 90% efficient.

EV’s aren’t the only answer

The transport sector can be decarbonised using a mix of battery and hydrogen fuel cell electric vehicles. Other low carbon options such as biogas or biofuels can be applied for other purposes, such as freight, shipping or aviation. Customers today can choose from a variety of fuels including standard petrol, high octane petrol, petrol with ethanol, diesel or LPG.

Much of the conversation about cleaner transport has been about electric vehicles – however hydrogen fuel cells could power vehicles and can support the decarbonisation of the transport sector.  The commercial challenges for both electric and hydrogen vehicles relate to reducing costs and developing the supporting infrastructure. For a hydrogen fuelled vehicle, the hydrogen is stored in a high pressure tank and reacts with oxygen in a fuel cell to create electricity to power the car. In a typical electric vehicle, the energy is stored in batteries that power the car.
Both types of vehicle provide zero tail pipe emissions but the lifecycle emissions are dependent on how the hydrogen was formed or the electricity produced. Generally, it is thought that hydrogen vehicles would be lighter, as they do not require a high volume of batteries, may have a longer driving range and could be refuelled at similar times to refuelling a petrol vehicle. 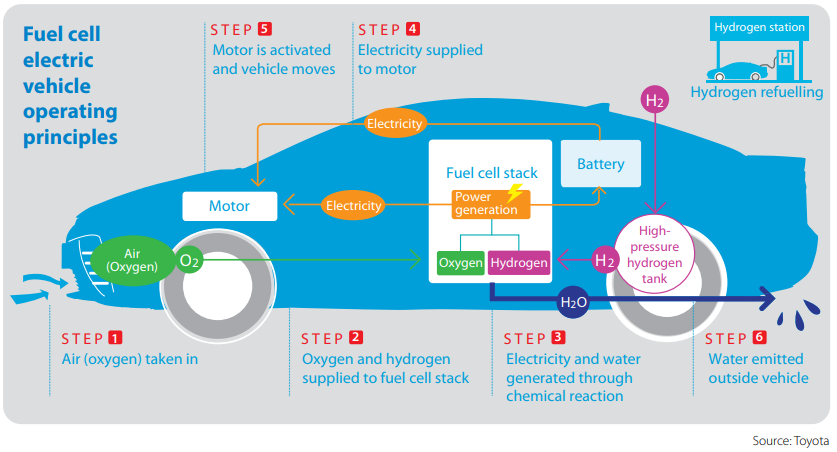 Modern gas networks are able to distribute hydrogen through fuelling stations in the home, commercial and industrial areas or at existing fuel retailers where hydrogen could be pressurised to refuel vehicles quickly. The nature of the gas networks inherently supports energy storage and has additional capacity to transport surplus energy.

Battery electric vehicles will require additional power generation and distribution. Charging vehicles stations might be placed within the home or at parking spaces at work. Orchestrating this load – and the variable load of residential rooftop solar PV – will ensure that the system is stable and secure.

However an all-electric approach to decarbonising transport (using battery electric vehicles) will require significant upgrades of infrastructure. The IEA recognised that large-scale EV charging and demand response would require optimisation of the energy system and smart management of the relationship with grid infrastructure and EV users. The IEA argued that managing power demand in a world of fast chargers is likely to require the deployment and use of stationary storage at the local or grid level.

The Electricity Network Transformation Roadmap indicates that a 40% penetration of battery electric vehicles by 2050 will require an additional 43 TWh of generation (and transmission and distribution). 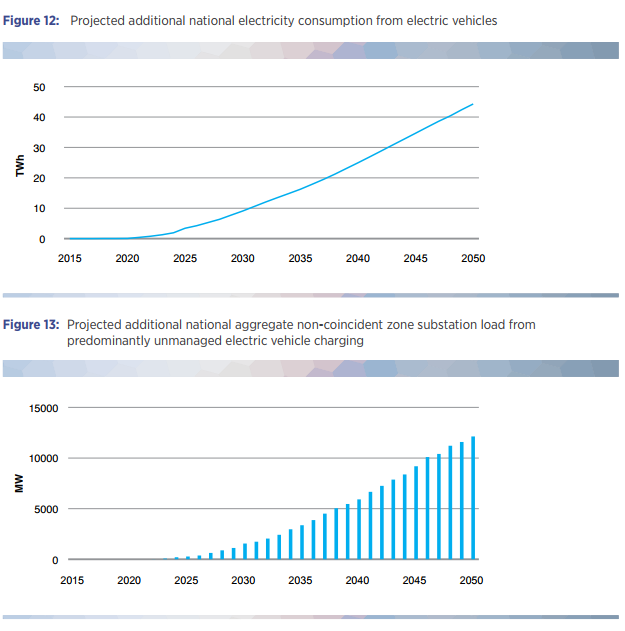 Hydrogen as a clean fuel

When hydrogen is burned for power, transport or heating purposes, it produces only water vapour. No particles, no greenhouse gases, no carbon monoxide or sulphur dioxide emissions – just water vapour.

The life-cycle emissions of hydrogen can be zero if it is produced using renewable energy; the determining factor is if it is sourced from natural gas or coal. In the latter case, the emissions could be reduced by including carbon capture and storage technologies in the hydrogen production facility, such as Canada’s Quest project.

Producing the hydrogen is the first step. Hydrogen provides opportunities as a chemical feedstock for power generation, but also creates potential solutions in transport and for heating and home cooking. 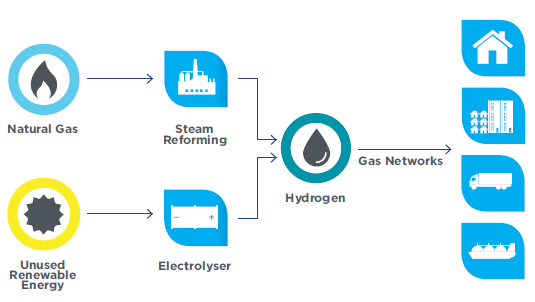 Hydrogen from renewable sources is the preferred pathway in A hydrogen Roadmap for South Australia. The Renewable Energy Fund (a $150m commitment in the roadmap) is supporting a green hydrogen plant near Port Lincoln to decarbonise transport using hydrogen.

The Hydrogen Utility project aims to demonstrate the commercial and technical viability of creating hydrogen from wind and solar energy to power a 10MW turbine and a 5MW fuel cell to supply power to the grid. The project may also produce ammonia as a by-product and this could be used in fertiliser manufacture or for exporting hydrogen as a transport fuel. The role of hydrogen applied in other pathways (e.g. its use in the home) could be supported by the Renewable Energy Fund.

The breakthroughs in hydrogen technology that are receiving world-wide attention, and that are being pursued locally represent further opportunities to decarbonise the national transport fleet.  Energy network businesses will be key enablers to decarbonising transport and there are clear opportunities for the transport sector to work with both electricity and gas networks to meet the challenge. 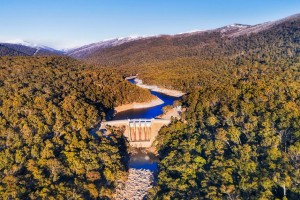 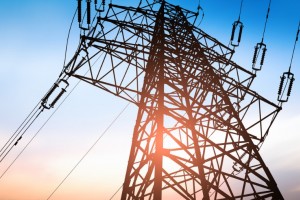