In 2017 the Nobel Prize in Economics was awarded to the father of ”nudge” economics, identifying how human qualities test rational economics. Can behavioural economics help solve some of the challenges the energy sector faces?

In the face of the energy industry’s rapid evolution, customers have more choice than ever. Many new products and services are designed to help customers make informed decisions, better serve their energy needs and make energy easier.

However in the face of so much choice and increased access to information, and in spite of the clear savings the market offers customers, a significant portion of customers are not responding. The Australian Government intervened in late 2017, with the Prime Minister saying;

We know that 50 per cent of households have not moved retailers or contracts in the past five years, even though savings can be as high as $1500.

… companies will move towards marketing their offers in dollar terms, speed up switching between different providers, provide more flexible billing (such as monthly where smart meters are in place) and work with government and regulators to communicate more clearly and effectively with customers.

Even with the growing range of offers and information available, on top of the wall-to-wall media coverage of energy prices over the past 18 months, many Australian consumers remain on standard retail offers. Since Victoria deregulated its retail electricity prices in 2009, Energy Ministers of both political persuasions have repeated the “shop around and save” mantra ad infinitum, but the Prime Minister says 50% of customers have not done so.

Just as we know effective competition encourages innovation and cheaper prices, ineffective competition is likely to lead to suboptimal outcomes for most consumers. This is not restricted to retail pricing. In late 2015, the Victorian Government rejected networks’ push to have new fairer electricity tariffs applied on an opt-out basis, with Minister D’Abrosio declaring “we believe in giving Victorian households choice with an opt-in model.” The result? Despite modelling suggesting a majority of customers would be better off under the new tariff structures, take up rates have been virtually zero.

Is the answer more – or better – information for customers?  Behavioural economics may shed light on what alternatives could help customers get better value from the energy system.

Nudge Theory and the beginning of Behavioural Economics

In late 2017 Richard Thaler, the co-author of the bestselling book ‘Nudge’ won the Sveriges Riksbank Prize in Economic Sciences – better known as the Nobel prize for economics.

According to Royal Swedish Academy of Science responsible for the award;

“Richard H. Thaler has incorporated psychologically realistic assumptions into analyses of economic decision-making. By exploring the consequences of limited rationality, social preferences, and lack of self-control, he has shown how these human traits systematically affect individual decisions as well as market outcomes.”

Thaler suggests that when it comes to decision making, traditional economic models are not good predictors of how individuals are likely to act in real-world settings, and when faced with increased complexity, they often make choices that are seemingly at odds with ‘rational’ agent-based economic models. His work is based on the idea that individuals can be influenced by social prompts that alter behaviour.

“Thaler’s work published extensively in the field of finance pinpoints the difference between the predictions in financial literature, which assume that people act perfectly rationally to maximise their expected profits (the idea of the homo economicus), and what actually happens on the markets”. [2]

Thaler’s work and the ‘nudge’ concept in the field of Behavioural Economics examine how to change behaviour using effective social cues and ‘choice architecture’. It has been applied across a range of arenas from increasing organ donation rates and reducing alcohol intake, to addressing taxes, mobile phone theft. Relevant to the Australian energy context – it has also been applied to persuade consumers in the UK to consider changing energy provider to receive better energy deals.

Opower, is credited with using behavioural economics in energy use by providing households with “Home Energy Reports” with two features, firstly customised suggestions on how to save energy and secondly, using social comparisons when presenting energy reports in order to influence households’ energy consumption by providing information on the households’ use of energy relative to the 100 nearest houses of similar size. 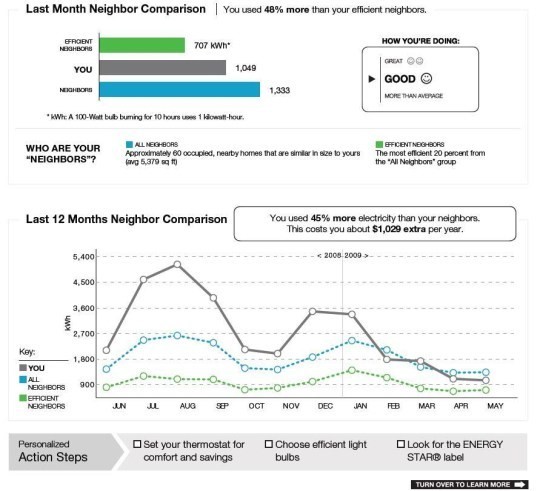 Opower, now owned by Oracle, claim that over ten years their “nudges” have seen customers reduce energy by over 16 TWh and enjoy nearly $2 billion in bill savings.

Understanding how customers respond to energy markets is critical as the electricity system changes and decision makers and industry strive to make information simpler and more transparent for diverse customers, enabling choice while protecting the most vulnerable.

It isn’t as simple as just providing more information. Smart meters and energy monitoring devices are but one part of the solution. More data and information can actually make it harder for individuals to make choices – but behavioural economics can help address this.

Energy Networks Australia and CSIRO in the Electricity Network Transformation Roadmap recognise the importance of customer-centric design, placing customers at the centre of the Roadmap development process. The Roadmap began with a strategy to understand how energy customers of the future will want to interact and engage with the electricity system. Improved choice and value from a growing range of electricity services and products will impact engagement.

To better understand such issues, behavioural economics researchers from CSIRO contributed work to the Roadmap by proposing a range of cognitive biases, heuristics and other psychological factors that may influence the choices and actions of energy consumers. For example, people generally prefer the status quo and opt for default settings – so that, when faced with change or complexity, many customers tend to stick with current products, offers or services – a tendency that reflects the status quo bias.[3] Energy customers face the very real challenge of ‘choice overload’. Decision making is hard when faced with too much information or too many choices.

CSIRO’s work highlights that customers also place more weight on potential losses compared to potential gains. “Loss aversion” means they will often forego the prospect of larger gains in order to avoid even small losses. These potential losses don’t have to be tangible – for some people, even just the time, effort, inconvenience or hassle of considering choices can bias towards maintaining the status quo.

There is a role for the energy sector to support customer decision making when it comes to selecting new products and services, or choosing different retail products.The sector can help customers navigate the transformation of the energy system by; simplifying information; applying rebates and bonuses to overcome loss aversion; recognise the bias to maintain the status quo and make new options as easy as possible, such as changing default choices or making change easy and convenient

The work by CSIRO and others also highlights how customer choices are shaped by social cues, peer comparisons and other normative social influences. Initiatives such as ‘opting out’ rather than ‘opting in’ (i.e. changing the default setting) may also encourage more customers to seek better deals that save money while also reducing costs across the system.

With Australia’s growing adoption of smart meters, more information platforms and cost reflective tariffs, it is timely to consider how behavioural economics can shape our sector. As the potential for more products, services and enabling functions grows, it is essential that policy makers evolve regulatory frameworks so they deliver positive outcomes for all consumers, not just the few who   might respond according to purist economic theory.

To be clear, this is not a call for re-regulation of retail energy prices, just a recognition that by itself, too much choice is not enough. Perhaps a gentle ‘nudge’ of customers could help to transform energy markets while assisting customers to save more from the energy system that powers their lifestyles.