Last Friday, Australian Energy Ministers committed to an independent review of Australia’s power system security, even as supply was still being reconnected to major industrial customers in the State’s mid-north. The disruption to over 1.6 million South Australians was another example of the way major storm events can create an acute focus on the reliability of the grid – how it can catalyse action by governments and industry.

A week after South Australia’s storms Hurricane Matthew brought power outages to 2.7 million people across south eastern United States. In many cases, the impact to customers was mitigated by a smarter, more resilient grid.

Florida Light and Power (FLP) noted that investments of $2.6 billion resulted in fewer outages and faster restoration times in this week’s event:

These benefits reflect widespread, measurable improvements in grid resilience that the United States achieved with the electricity industry under the American Recovery and Reinvestment Act, which resulted in 99 Smart Grid Investment Projects. Examples of the benefits identified by the US Department of Energy[2] include:

Improvements in storm resilience and response were in addition to general reliability benefits of over 40 % in Florida and Tennessee identified by the US Department of Energy.

Superstorm Sandy in 2012 is now often credited with changing the face of America’s grid, after leaving 8.5 million people without power in 21 US states. It drove a fundamental new focus on resilience, investment in smart-grid technologies and faster restoration strategies.

“I think Sandy was a watershed event for the industry in terms of planning.  It was a wake up call.”

“It [Hurricane Sandy] was one of those tipping points where utilities, regulators, the policy makers all agreed that there needed to be not just incremental, but significant new investments to deal with severe weather.”

Climate change and the need for a more resilient grid

Severe weather is the leading cause of outages in the United States, causing over 87% of outages impacting 50,000 customers or more[5], and the US Department of Energy has recognised that the frequency and intensity of storms are increasing. Seven of the ten most costly storms in US history occurred between 2004 and 2012.[6] 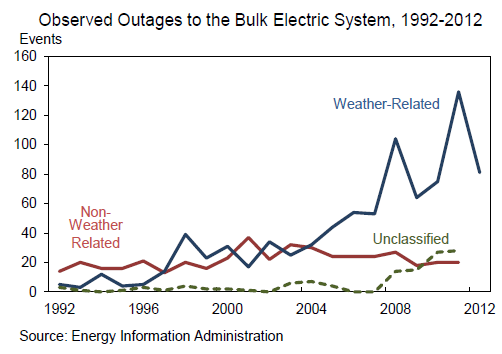 Towards energy security – The Finkel Review

COAG Energy Council Ministers agreed to initiate a review by the Chief Scientist, Dr Alan Finkel AO, to “take stock of the current state of the security, reliability and governance of the NEM and provide advice to governments on a coordinated, national reform blueprint.”[7]

The scope of the review is broad, particularly as it is intended to take account of existing reviews underway already including[8]:

The purpose of the review is to develop a national reform blueprint for maintaining energy security and reliability in the NEM. The blueprint is intended to outline national policy, legislative and rule changes required to maintain the security, reliability and affordability of the NEM in light of the transition taking place.

Importantly, it will require an economic dimension and will need to assess the costs and benefits of options for improving system security and reliability in the NEM. A preliminary report has been sought for the COAG Leaders’ Meeting in December, with a final report early in the new year.

There are two obvious challenges for the Finkel Review, given the intense political focus on these issues and the limited time available:

As international experience demonstrates, there is opportunity to develop the resilience, not only of the grid, but the institutional capacity to better manage the trilemma of energy security, sustainability and affordability to benefit customers.

Into the mix: Australia’s new tool for integration of renewables