Snowy Hydro operates the Snowy Hydro-electric scheme which includes nine power stations with pumped storage at Tumut 3 power station and Jindabyne pumping station. Scheme capacity is 5,500MW with a further 888MW of generation from eight wind and solar projects. Construction of Snowy 2.0 has started which will add a further 2,000MW of on-demand energy generation of up to 175 hours at full capacity. This additional large-scale storage capacity is enough to power three million homes for a week.

In February 2019, the Federal Government gave shareholder approval for Snowy 2.0 to proceed and committed up to $1.38b in equity from 2020, with Snowy Hydro funding the remainder of the project. Snowy 2.0 is expected to cost somewhere between $3.8b and $4.5b. This represents a significant step forward after two years of engineering and financial modelling to develop the project business case.

Snowy 2.0 will link two dams – Tantangara and Talbingo – through a series of tunnels, underground power stations and pumping capability. Excess renewable energy, such as wind and solar, can be utilised at times of low demand to pump water to the upper dams where it is stored as energy in waiting. At times of peak demand, the water can be released within minutes.

The water is essentially recycled between the upper and lower reservoirs enabling the same water to produce on-demand energy again and again. This provides a measure of drought proofing.

As Australia moves to a lower emissions economy and the supply of energy becomes harder to predict with intermittent sources like wind and solar, energy storage such as pumped hydro provides invaluable firming capability. Its on-demand rapid start capability means that Snowy 2.0 will provide system security and reliability benefits in the NEM.  The increased capacity in the Snowy scheme will also increase competition in the market, placing downward pressure on wholesale prices which should ultimately result in lower bills. 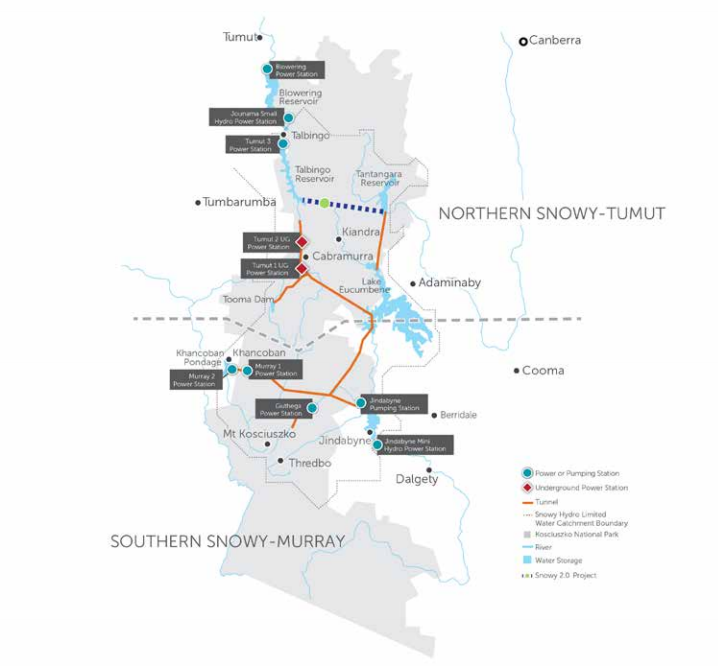 Energy is generated by water from the upper reservoir spinning through two giant turbines to the lower dam.  At times of excess energy these turbines can operate in reverse to move the water back to the upper dam for re-use. The first power is expected in late 2024-25. At full generation capability, this project will be able to fill an Olympic size swimming pool in just seven seconds.

The project will require about 40km of 10-metre diameter tunnels to be excavated.

Transmission as the enabler for the Snowy 2.0 storage value

The Snowy 2.0 pumped hydro project was considered as part of the Australian Energy Market Operator’s (AEMO) 2018 inaugural Integrated System Plan (ISP). AEMO is developing the second updated ISP for release by mid-2020.  Federal Government shareholder approval for Snowy 2.0 means that this pumped hydro project is a committed project in the next ISP.

New renewable generators are not usually built in the same location as retiring coal fired plants. This means upgrades and new transmission lines may be needed to connect them into the NEM. Snowy 2.0 provides an opportunity for excess renewable energy to be utilised and fed back to major load centres like Sydney and Melbourne at times of high demand. Transmission projects will be required to enable this. 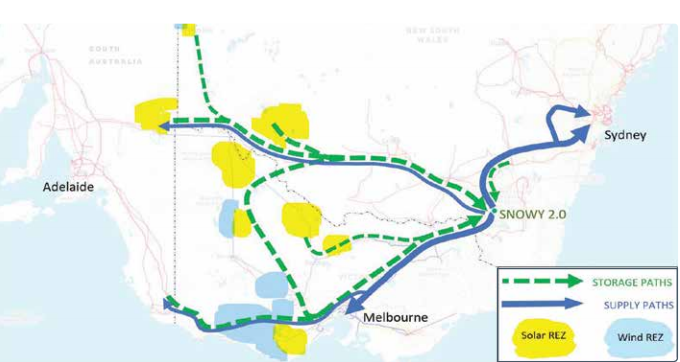 What transmission work is needed? 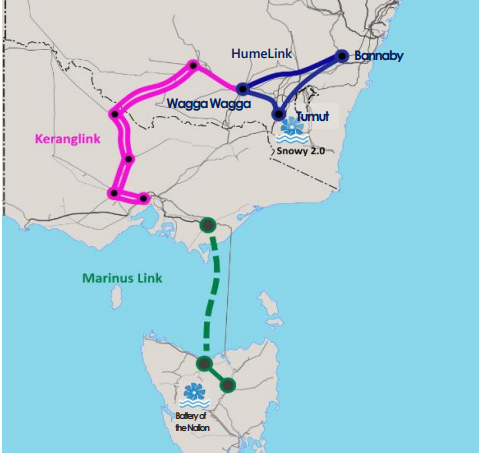 Snowy Hydro owns the generators but not the transmission network required to get the additional capacity to customers.

TransGrid, the operator and manager of the high voltage transmission network in NSW and ACT, is working on a detailed regulatory investment test for enhanced transmission in southern NSW (called HumeLink in AEMO’s report) and has commenced consultation on the Project Specification Consultation Report.

If new lines are built in a timely manner, the existing Snowy Hydro scheme could deliver 1,200MW more energy to the NEM to help mitigate the closure of Liddell (2,000MW) in 2022.

A new transmission line between Snowy and Melbourne (KerangLink) is also being promoted to enable 1,500MW of existing capacity to flow south to Victoria and help avoid rolling outages as happened last summer.

In addition to its support for Snowy 2, the Federal Government has provided funds for the MarinusLink project to be considered in more detail and will develop an underwriting mechanism for Hydro Tasmania’s Battery of the Nation through its Underwriting New Generation Investment program. This project would enable the Battery of the Nation to provide reliable energy to the mainland. The MarinusLink regulatory investment test process is due to be completed in 2019.

The impact of Snowy 2.0 and these transmission projects are considered in AEMO’s third insight report for the ISP, released yesterday.

NSW transmission network service provider, TransGrid and Tasmania’s TasNetworks are progressing the necessary regulatory investment test processes to progress HumeLink and MarinusLink and AEMO is preparing information to start the process for KerangLink.

It is important, given the Liddell closure is looming, that these projects are subject to the expedited post regulatory investment test processes now available and are able to recover costs of early works.

These are substantive transmission projects with decisions being made under the current regulatory framework. There are however substantial reform processes underway that will likely see this framework change.

If the benefits to our electricity system and customers are to be realised from new storage and complementary transmission, regulatory and policy certainty are essential to support necessary investment as reforms progress. 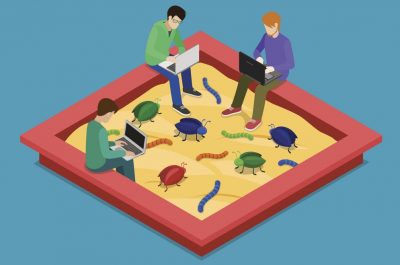 Playing in the sandbox: encouraging innovation