Two reports from the UK released in the last month examine the future of the UK electricity sector and discuss, amongst other things, the need for distribution network operators to transition to become distribution system operators.

Pathways for the GB Electricity Sector to 2030 from Energy UK, the trade association for the UK energy industry, gathers the views of senior leaders in the UK industry on possible pathways to ensuring a clean, secure and affordable electricity supply to 2030. Many of those interviewed “made a connection between system design and the need to facilitate DNOs [distribution network operators] in their transition to more of a distribution system operator (DSO)”[1].

Many believed increasing decentralisation of the energy system, with much more small-scale renewable generation and demand-side management activity, would mean DNOs would need to take more of a DSO role.[2]

The theme continues in Smart Power, a report from the National Infrastructure Commission (NIC) following studies of the UK’s electricity sector. The NIC was asked to consider how the UK can better balance supply and demand, aiming for an electricity market where prices are reflective of costs on the overall system. The report identifies that:

The distribution system operator would be required to manage a complex and interactive energy system, driven by rapid technology development and changing consumer behaviour. Today there are multiple and increasing, distributed points of variable production and consumption of electricity connected to the distribution network, unlike the traditional network that consisted of a linear, one-way flow of energy from large-scale producers to consumers. The system is increasingly becoming a two-way exchange network, enabling the exchange of energy and information, and increasing consumer choice.

However, as the Smart Power report points out[4]:

…the underlying mechanics of the electricity system won’t change. Electricity demand and supply must be balanced on a second by second basis in order to maintain secure supply…The network needs to be resilient to unexpected events, such as a surge in demand or a power station going offline without inconveniencing consumers.

The report goes on to focus on the innovations that will be required in the UK to deliver a more flexible electricity system to manage the challenges brought about by increasing complexity, while saving money and meeting climate reduction targets. It identifies these as[5]:

The report notes that the potential cost saving could be as large as £8 billion a year by 2030[6], but that reaping the full benefits of the innovations will require “more active management of our local electricity networks”[7].

Currently, National Grid, a privately owned company, has responsibility for balancing the supply of electricity with demand at a national level in the UK, but distribution network owners do not have responsibility for managing supply and demand on their networks.[8]

National Grid ensures there is sufficient inertia in the power system to manage imbalances in the very short term, and by having sources of power in reserve that can adjust output quickly over the slightly longer term (see figure below).[9] 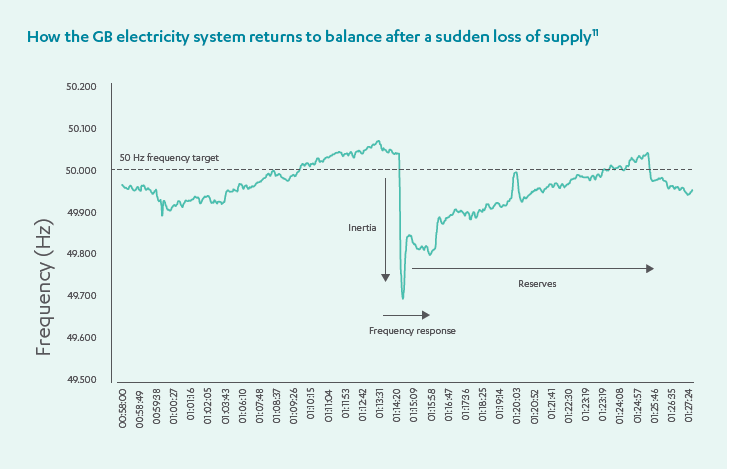 While recognising this role in the transmission system, the NIC highlights that most of the potential for storage and demand flexibility will be embedded in local networks[10].

This is why the need to create “distribution system operators” was one of the core themes…These bodies would be tasked with actively managing the activity on their networks, rather than simply ensuring there is adequate physical capacity for electricity to get to where it needs to go.[11]

A key recommendation from the NIC, set out in the report, is that the UK Department of Energy and Climate Change (DECC) and the Office of Gas and Electricity Markets (Ofgem) – the regulator – should enable the transition to more actively managed local networks and consult and set out how and when the transition should take place.[12]

Further, the NIC recommends that DECC and Ofgem should review the regulatory and legal status of storage and remove outdated barriers[13], and incentivise network owners to use storage (and other sources of flexibility) to improve the capacity and resilience of their networks, as part of a more actively managed system.[14]

The NIC also recommends that future planning frameworks enable and incentivise the adoption of storage and demand flexibility technologies as solutions for postponing or mitigating network upgrades and grid reinforcements, even if it increases the risk of stranded assets.[15]

It will be essential in the very near future that Distribution Network Operators transition to Distribution System Operators with a function for not just maintaining and managing the wires in their network, but also managing and balancing the energy flows.[16]

Despite significant differences in the United Kingdom operating context, there are clear parallels to the evolution of Australia’s energy system.

The Electricity Network Transformation Roadmap project, being undertaken by the Energy Networks Association and CSIRO, is evaluating key issues in an Australian context. These include changes to incentives, regulation, network operation and ‘transactive’ energy systems that are likely to be required to realise the full potential for customers of a digitally-enabled smarter grid, and facilitate customer choice in a safe, reliable and efficient manner.

The Roadmap’s Interim Program Report focussed on the future electricity network as a ‘platform provider’ for creating value and facilitating the provision of new services between customers and a range of participants. The report cited[17] new operating principles, highlighted by Accenture, that progressive business models are adopting:

During 2016, the second stage of the Roadmap project will evaluate these issues and potential implementation measures, with the close involvement of energy stakeholders. 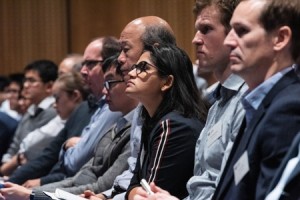